A Nancy Drew Christmas is a book in the Nancy Drew Diaries series. It was first published September 18, 2018 by Aladdin, an imprint of Simon & Schuster. In it, Nancy solves sabotage at a ski resort in Montana over the Holiday season.

A Nancy Drew Christmas is an unnumbered book, originally published only for eBook and Hardcover. However, a paperback version was released on October 20, 2020.[1]

Nancy finds herself a Christmas mystery in this super special eighteenth book of the Nancy Drew Diaries series, a fresh approach to the classic mystery series.
Nancy is spending her winter vacation at the most beautiful ski resort in Montana. Everything looks perfect, from the spectacular mountain views to the cozy rooms inside complete with fireplaces and holiday decorations. Unfortunately, not all is as jolly as it seems.
Things started to go wrong on her very first day; she hit a bad patch of ice on a run down the slopes and broke her leg in a couple of different places. Then a doctor decided she needed a giant cast and lots of bed rest. It’s been a week of unfortunate events for rest the resort too; there was a sabotaged opening dinner, multiple hotel room break-ins, and a dangerous trap was set for the star chef. And if she thought things couldn’t get any worse, a giant storm is heading her way and may just snow everyone in for days. Trapped in a hotel with someone bent on destruction? Cast or no cast, you know this sleuth is on the case.
It’s almost Christmas and both guests and staff are starting to panic. With all the odds stacked against her, can Nancy solve these crimes in time and save the holiday season? Or is this one Yuletide she’ll wish to forget?

Official synopsis from the audiobook CD back cover:

In this special holiday Nancy Drew mystery, Nancy and her father are staying at a brand-new ski resort for winter break. But she should know better than to expect an uneventful vacation.
Things start to go wrong as soon as Nancy arrives. Someone tries to sabotage the new restaurant, and there are mysterious break-ins. There's no rest for this teenage sleuth - and this holiday season will be no exception.
Luckily, Nancy has gathered some promising leads. But it's almost Christmas, and both guests and staff are starting to panic. Can she solve these crimes and save the holiday season?

Contents from the ebook edition:

Characters appearing in this book include:

The book was released in September 2018 in hardcover and eBook format. The audiobook was simultaneously released. A paperback version was not released until October 2020. 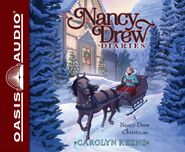 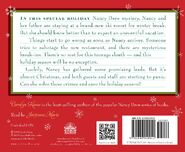 Audiobook back
Add a photo to this gallery

Retrieved from "https://nancydrew.fandom.com/wiki/A_Nancy_Drew_Christmas?oldid=23938"
Community content is available under CC-BY-SA unless otherwise noted.