Keith Dahlgren
Arthur Hitchens is the financier for the remake of the movie Pharaoh.

Arthur has Molly McKenna, the movie's producer, bring Nancy to the set to investigate the accidents going on in 2008. However, he tells Nancy that the real reason they hired her is that he is looking for the lost footage from the original Pharaoh film. Arthur is convinced that the publicity generated from its finding is going to make the film a hit. Nancy also deduces that he is the one causing the accidents to generate more publicity.

Arthur made sure that Jorge Jackson was the director so he could pay him as little as possible.

The lost footage is found, but the movie is still a flop if Nancy doesn't find the Jewel of Karnak. If she does, the movie is a success because of the publicity generated from that. 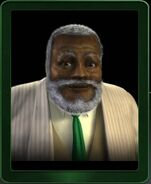 Add a photo to this gallery
Retrieved from "https://nancydrew.fandom.com/wiki/Arthur_Hitchens?oldid=7986"
Community content is available under CC-BY-SA unless otherwise noted.