The Secret at Shadow Ranch

Dave Evans
Elizabeth "Bess" Marvin is a character in the Nancy Drew Mystery Stories series. She is one of Nancy Drew's best friends, along with George Fayne, who is Bess' cousin. Bess and George are introduced to readers in The Secret at Shadow Ranch.

In all of the incarnations of the character, Bess was born and raised in River Heights, with her cousin George Fayne and Nancy. Bess is often the character who is more timid and likely to complain.

Bess is one of Nancy's best friends, who often accompanies her in her cases. She dates college student Dave Evans in the revised text.

Bess now has a younger sister named Maggie, who is twelve years old.

Bess is a bubbly, somewhat naïve young woman, who is easily frightened when involved in Nancy's adventures. Bess is a coward, who always fears the worst is going to happen, and insists that Nancy gives up several mysteries. However, she is a loyal friend, and nonetheless enjoys helping Nancy in her mysteries. Bess does sometimes surprise even herself with her bravery, and she occasionally deciphers clues that stump even Nancy.

Bess loves fashion and shopping, and is a true romantic. She often attracts young men, and is quite flirtatious. Bess also has a weakness for food, especially chocolate and ice cream. In the Mystery Stories, George often makes comments on Bess' weight and eating habits. Bess admittedly cannot stick to a diet, no matter how she tries.

In the Mystery Stories of the 1990s and early 2000s, Bess has gained an interest in computers.

Bess remains mostly unchanged, although her technology skills are given to George. She is mentioned to be a skilled mechanic, although this skill is rarely shown throughout the series. Like Nancy and George, Bess has a rivalry with Deirdre Shannon.

Bess has appeared in the following Nancy Drew adaptions. 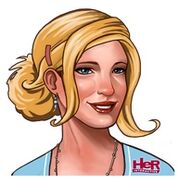 Bess Marvin in Alibi in Ashes

Bess in Alibi in Ashes

Bess and George in Ransom of the Seven Ships computer game.