“Trusted confidant [of Nancy]. Lacks judgement, but displays above average intuition. Easily manipulated, but her candid nature makes her an unlikely target after any individuals attempting to influence Kestrel.”
— Cathedral Archives on Bess[source]
This page is for the video game character. For the character in the novels, see Bess Marvin.

Legend of the Crystal Skull
Ransom of the Seven Ships
Resorting to Danger!
Alibi in Ashes
The Shattered Medallion

Curse of Blackmoor Manor
Trail of the Twister

Bess has an interest in fashion and boys. As a person who loves to flirt, she tends to ask Nancy if any of her suspects are cute. She is very friendly and thus talks easily with all sorts of people, which she can use to her advantage.

To her cousin George's exasperation, Bess is rather naive and prone to believing the supernatural over more logical explanations. Although she supports Nancy's detective work, Bess herself tends to freeze up when asked to perform any sleuthing herself. Even so, when the chips are down, Bess will do what it takes to help her friends.

Due to her love of daytime soap operas and soap opera hunks (i.e. Rick Arlen), Bess helps Nancy with her investigation.

Bess stays in River Heights, but asks Nancy to check up on the status of her crush, skier Jacques Brunais. She is disappointed to find out he is engaged.

Bess alerts George and Ned about Maya's kidnapping. She is also a fan of Brady Armstrong.

George and Bess play "Go Fish" while it rains outside. They are later visited by The Hardy Boys.

Bess brags about her new Caller ID to anyone who calls her. She uses it primarily so she can see if the boys who call her are cute enough to warrant answering the phone. She also has a mild long-distance crush on Jeff Akers.

Nancy also reveals to Red that Bess got a digital camera for her birthday, and they learned how to use it together.

Bess' mother has made her get rid of her Caller ID, because she was annoyed by all the times Bess would not answer the phone. Bess is now desperately waiting for a phone call from Matt, a cute boy who works at the movie theater. By the end of the game, they get a date.

Bess is driving George crazy as usual by cooking (mostly burning) meals from a cooking show, because the host is cute.

Bess and her cousin George were supposed to go on a vacation with Nancy to Shadow Ranch, a place in Arizona that their Uncle Ed and Aunt Bet owned. However, they had to take different flights.

Unfortunately, their plane got delayed to Omaha because of technical problems. After getting another flight, their next plane had to stop in St. Louis because of bad weather. When they finally make it to the ranch, Nancy has already solved the case without them. But she couldn't have done it without George's help with a book about nineteenth century clothing.

In The Shattered Medallion, it is revealed Bess briefly dated Dave Gregory while visiting. He took her to a county fair.

Bess and George go to a sailing camp that doesn't allow cell phones. Bess believes that the snobby Maxwell twins, who are going to the same camp, should be disqualified for being too tan and setting a bad example to the younger campers when it comes to skin care.

The Secret of the Old Clock

In 1930, Bess has to battle with her neighbor, Mrs. Farthingham, to use the phone.

With Nancy off on her train trip, Bess has roped George into helping her repaint her room, because she'll be grounded if it isn't finished soon. She isn't focusing very hard on her work and often accidentally gets "adobe beige" paint on George.

A week earlier, George had told Bess she had a crush on a guy in a candy shop. However, even though George told her not to tell, Bess disregarded this and told him immediately. George reveals that Bess prefers Joe over Frank.

Bess reluctantly goes on a jog with George and is not happy whenever George lets slip the word "run". She also begins using the word "rude" in a positive way, after hearing that Minette does it.

As a getaway vacation, Carson and Mr. Marvin agree to send Nancy and Bess to New Orleans for a short getaway trip. While Nancy goes to check on Ned's friend, Henry Bolet, Bess stays at their hotel in the Frech Quarter. When Nancy stumbles onto another mystery (and cannot leave the house), Bess helps by investigating a curio shop, interviews a suspect, and even infiltrates a secret society called the Jolly Roger Krewe. When her phone goes off during one of the Krewe's meetings, she gets thrown into a sack and shoved into another room to be interviewed by the Krewe's leader. Unfortunately for him, an angry Bess isn't afraid to talk her way into getting information from him. For the first time in the series, Bess is a playable character.

Bess is attending the Dunhill's birthday pool party with George back in River Heights. They swoon over all the guys with abs cooking on barbecues. They inform Nancy that Ned has wisely gone into hiding from a boy-crazy girl named Minkie McNab.

Bess wins an online sweepstakes for a five-day vacation in the Bahamas. She decides to bring George and Nancy along, but Nancy arrives a day late due to a father-daughter banquet she had to attend. When Nancy arrives, a frantic George informs her that Bess had been kidnapped. The whole contest was a hoax to get Nancy on the island and find a long-lost treasure for the kidnappers. Players get to see Bess for the first time at the end of the game.

Bess and George appear in the opening cut scene when George gives Nancy a device for detecting bombs and Bess points out it can fit into Nancy's purse (obviously annoying George).

Bess and George are visiting mutual relatives in Wisconsin. Nancy can reach Bess by voice mail.

Bess is spelunking with George and Ned at the Carlsbad Caverns. Nancy was originally supposed to join them, but was called to Tornado Alley.

Bess and George travel to Kyoto, Japan to attend the Technology of Tomorrow Today expo. Nancy is also in Japan for a vacation offered by P.G. Krolmeister, whom she assisted in Trail of the Twister. She and George meet Yumi Shimizu, the local Bento booth owner. They become good friends and have a lot of fun together. Nancy can receive many purikura phone pictures of the three.

Bess helps Nancy distract Logan Mitchell, the assistant of Savannah Woodham, a paranormal investigator, whom Logan will not let speak to Nancy. It must have gone well because Bess and Logan develop a mutual crush on each other. By Alibi in Ashes, Bess and Logan are not together anymore.

Nancy gets arrested for an act of arson that she did not commit. Bess, George, and Ned all have to work together to get her out of jail for most of the game. One of the suspects, Toni Scalari, has a soft spot for Bess. The ice cream shop that Toni owns, Scoop, is a favorite hangout of Bess's. She used to love eating lots of ice cream there, but after eating bowlful after bowlful as a cover to spy on anotheect, Deirdre Shannon, Bess never wants to see another ice cream cone again.

With George at a new job, Bess watches many Egyptian movies and actually plays an Egyptologist on a television show, although she has no idea what her character is saying. She naturally becomes worried about Nancy after hearing that the water supply is gone, thinking it may be due to a curse.

Possibly foreshadowing The Silent Spy, Bess mentions Nancy's mother (and the way that she died) is why she thought Nancy solved mysteries.

With Nancy on another case, and George away at her internship, Bess has become extremely bored. Thus, she is hanging out with Ned (although she claims she has "kidnapped" him).

They are watching otter videos, planning a road trip to see George, and worrying about Nancy on Blackrock Island. They also went to see The Relation-Shipwreck, which made Bess too emotional.

When Ned asks why he has to break into Nancy's house, she mentions Bess and George are out of town. Her code name at Cathedral is "Magpie".

A younger Bess is seen in a flashback. Through walkie-talkies, she states that she got grounded (although why is unknown). Overhearing Kate and Carson Drew arguing, she asks Nancy what's wrong and encourages her to eavesdrop on them.

Bess successfully enters George and Nancy in George's favorite show, Pacific Run. Bess comes along with them to New Zealand, where the show is taking place that year. When George falls off a bridge and gets injured, Bess reluctantly steps in as Nancy's teammate even though she is terrified of being hurt herself.

She develops such a deep infatuation with Sonny Joon, she almost has an existential crisis. All her usual natural ease with boys vanishes as soon as she sees Sonny. 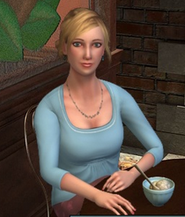 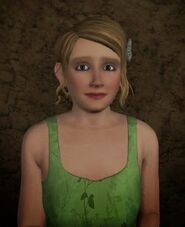 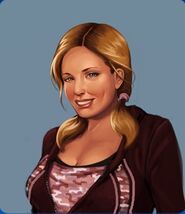 Add a photo to this gallery
Retrieved from "https://nancydrew.fandom.com/wiki/Bess_Marvin_(video_game_character)?oldid=24751"
Community content is available under CC-BY-SA unless otherwise noted.