Carson Drew is a main character in The CW's 2019 television series Nancy Drew. He is Nancy's father, and their relationship is strained following the death of his wife Katherine. Carson Drew is portrayed by Scott Wolf.

Carson is a man in his early fifties with fair skin, brown hair, and brown eyes.

Carson passed the Maine state bar on March 30, 1999.[1] His wife Kate passed away sometime in 2019. He later began having a relationship with their family friend Karen Hart.

Carson to Nancy: I was trying to honor your mom's wishes. I thought I was doing the right thing, but maybe I wasn't. Whatever you're feeling...you can carry it with you, but you can't let it consume you. 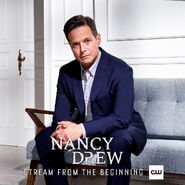 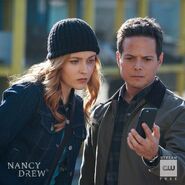 Retrieved from "https://nancydrew.fandom.com/wiki/Carson_Drew_(2019_character)?oldid=25424"
Community content is available under CC-BY-SA unless otherwise noted.