Curse of the Arctic Star

Curse of the Arctic Star is the first novel of the Nancy Drew Diaries book series. It was released on February 5, 2013, along with the second book Strangers on a Train, which forms a two-part arc. In this book, Nancy is asked to investigate sabotage on the maiden voyage of a luxury cruise ship.

Official synopsis from the back cover:

Bess, George, and I are actually in Alaska! Everywhere you look, there are massive mountains and sparkling deep-blue waters. We’re on the maiden voyage of the Arctic Star luxury cruise ship, and my old friend Becca Wright, the assistant cruise director, needs our help. She received threatening e-mails before even setting sail; then, a bloody body turned up in the swimming pool. And when a chandelier came crashing down in the dining room, we thought the Arctic Star may be cursed! There are so many passengers on board, I don’t know where to begin. But I better hurry; if I don’t act fast, this might be everyone’s final — and fatal — voyage!

The book was first released on February 5, 2013 in hardcover, paperback, and eBook format. 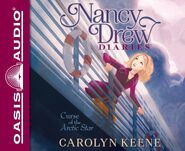 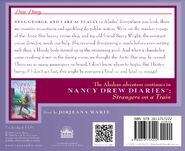 Audio CD back
Add a photo to this gallery

Retrieved from "https://nancydrew.fandom.com/wiki/Curse_of_the_Arctic_Star?oldid=21002"
Community content is available under CC-BY-SA unless otherwise noted.