Famous Mistakes is the seventeenth book in the Nancy Drew Diaries series. It was first published in January 15, 2019 by Aladdin, an imprint of Simon & Schuster.

Nancy and her friends are out to find a comedian’s saboteur in this seventeenth book of the Nancy Drew Diaries, a fresh approach to the classic mystery series.

Nancy’s boyfriend, Ned, has recently started his own podcast called NedTalks and he just got his big break. Up and coming comedian Brady Owens has agreed to sit down for an interview. And this isn’t just any interview; it’s the first interview Brady has given since a video of him lashing out at an audience member went viral. Now people are protesting his shows and calling him violent.

Nancy agrees to help out with the technical stuff so Ned can focus on the hard-hitting questions. But when they go to meet the interviewee they find Brady’s hotel room trashed—and no comedian in sight. Luckily, they find Brady unhurt and nothing of monetary value is missing from the room. Only his notebook of new material is gone. Brady says he knows it’s the people who’ve seen the video of him yelling. They think he’s dangerous and doesn’t deserve a platform. He wishes it would all blow over.

Nancy disagrees with Brady. She thinks he should apologize to the crowd and admit that he crossed a line. But she recognizes a person in need of help when she sees one and agrees to get to the bottom of this sabotage anyway.

Complex social media charts, undercover outfits, and intense button study send Nancy, Bess, George, and Ned on a wild ride through River Heights to uncover the truth. But nothing is what it seems in this game of comedic timing. Can Nancy find the culprit before it’s too late?

Contents from the ebook edition:

The book was first released on January 5, 2019 in hardcover, paperback, and eBook format. The audiobook was released the same day. It was originally intended for release in 2018, but was pushed back to 2019 for A Nancy Drew Christmas. 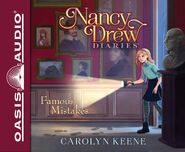 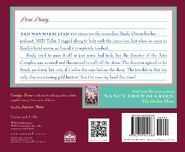 Retrieved from "https://nancydrew.fandom.com/wiki/Famous_Mistakes?oldid=5594"
Community content is available under CC-BY-SA unless otherwise noted.