The Haunting of Castle Malloy
Fiona Malloy is the daugher of Brendan and Caitlin Malloy. She was thought to have perished in Castle Malloy's explosion in 1944.

In 2008, Brendan's great niece, Kyler Mallory, decides to have her wedding at the castle. However, the groom, Matt Simmons, goes missing. When Nancy Drew, the maid of honor arrives, she decides to find Matt.

Eventually, Nancy finds Fiona in a little hut across the bog, and realizes that Fiona survived the explosion that killed her parents and had gone to live with the hermit who had previously owned the hut. Fiona pushes Nancy into a passageway that leads to her father's secret lab where she was keeping Matt as a pet.

Fiona had been flying around the castle on a jetpack her father had invented, making her look an awful lot like a legendary banshee. She was the one who flew in front of Nancy's car at the beginning of the game. She also continued making dolls, since her father had made some and incorporated them into puzzles he made out of Fiona's dollhouse. Fiona makes dolls of Matt and Nancy and gives them things they own, like Matt's engagement ring or Nancy's car keys. She is in the process of making a sheep doll when Nancy discovers the hut, and Nancy finishes it for her by stuffing it with wool.

At the end of the game, when Nancy rescues Matt and helps them both escape the lab, the castle's caretaker, Donal, helps the police take Fiona into custody. Donal had previously believed the Good People (fairies) had caused the explosion, wanting Fiona to remain a little girl forever, and still finds it difficult to believe that all the strange things that happened were Fiona instead of the Good People. She is transferred to a nursing home and given a good prognosis since she is so bright (Nancy comments that, after all, her father was a rocket scientist). 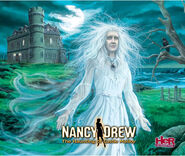 Add a photo to this gallery
Retrieved from "https://nancydrew.fandom.com/wiki/Fiona_Malloy?oldid=19300"
Community content is available under CC-BY-SA unless otherwise noted.