The Secret at Shadow Ranch

Buck Rodman
Burt Eddleton
George Fayne is one of the best friends of Nancy Drew, who is a major character is all of the major series. She was first introduced in 1931, with the original text of The Secret at Shadow Ranch.

In all of the incarnations of the character, several biographical elements of George remain the same. George is the first cousin of Bess Marvin, and was born and raised in River Heights with Bess and Nancy. She is often the friend to help Nancy with her cases, with little to no fear.

In the original text, George is mentioned to be named after her grandfather, and has several other family members of both sexes named after him. Though some books mention her to be an only child, the original text of The Ringmaster's Secret mentioned her having a nephew. With the revisions, George is said to be short for Georgia, and no other siblings of George's are mentioned.

In The Sign of the Twisted Candles, George and Bess are revealed to be maternal cousins through the Boonton family, and their great-great-uncle is Asa Sidney.

George is now the middle sibling, and only girl. She has an older brother named Sebastian, and a younger brother named Scott, who is twelve years old. In addition, her mother has become a caterer.

George is now an only child, as mentioned in The Sign in the Smoke. In The Ghost of Grey Fox Inn, George has a cousin named Charlotte who is not related to Bess.

Throughout the different incarnations of the character, George has been known to keep a sense of adventure, and be less frightened than her timid cousin. Most incarnations after the revisions portray George as an athletic tomboy.

In the original text, George is a somewhat forward girl, who is often clumsy or danger-prone, and less than proper in her demeanor and mannerisms. She is also portrayed as more feminine than in later books; when she criticizes Bess for shopping habits, George is reminded of her own purchases. In the 1940's, she cuts her hair short, but only as short This version of George has been nicknamed "George the Terrible" among some adult collectors of the series.

During the revisions, George has become less outspoken and feminine, and more responsible and endearing. She is mentioned to be an athletic tomboy, with a sense of adventure, and displays more dry wit. She is still somewhat prone to accidents, though now due to blind determination instead of clumsiness. She has also learned judo, and wins many athletic competitions.

When Simon & Schuster took control of the series, George is less of a tomboy, though is still quite athletic. She also begins to hold part-time jobs in several of the stories.

George's personality is nearly identical to that of the Mystery Stories. However, she is now also shown to have romantic interests in several stories.

In the Girl Detective series, George has become a moody pessimist. She is a technology whiz, who often helps Nancy with technology in her cases. She also has a rivalry with Deirdre Shannon, often baiting and teasing her with her childhood nickname "Dee Dee".

George's personality is similar to that of the Girl Detective stories, though she is less. In several books, George is shown to have a big appetite. She is also shown to have a soft spot for weddings in The Ghost of Grey Fox Inn.

In nearly all of her stories, George has short, dark hair and brown eyes. In original text stories, George is mentioned to cut her hair only as short as the current styles. She is also described as wearing dresses and skirts, but ones which are tailored and simple in appearance. In the revised stories, George often wears casual attire, except for social functions. In the Girl Detective and Diaries series, George has an extreme dislike of wearing dresses, preferring to wear jeans, a t-shirt, and a hoodie. 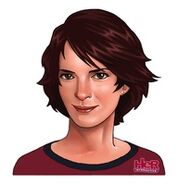 George in Alibi in Ashes

George in the Her Interactive game: Ransom of the Seven Ships 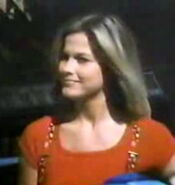