“Trusted confidant [of Nancy]. Shows strong mechanical and engineering abilities, and is watch-listed by a number of civilian organizations following her innovative work at the Jovic Center for Advanced Mechanical study.”
— Cathedral Archives on George

Ransom of the Seven Ships
Alibi in Ashes
The Shattered Medallion

Georgia "George" Fayne is one of Nancy's best friends who regularly helps out in her cases.  She is also available to talk to in 18 games. She is Bess Marvin's cousin, and they are often on the phone together.

Georgia prefers to be called George and is an all-around tomboy. Athletic and technologically gifted, she often rolls her eyes at her cousin Bess's more girly antics, especially when they involve boys or clothes. Nevertheless, she cares about Bess and Nancy very much and is always willing to lend them a hand.

She is very intelligent and currently interns at Technology of Tomorrow Today. Her reasonable, logical thinking has helped Nancy many times on her cases.

George and Bess play "Go Fish" while it rains outside. They are later visited by The Hardy Boys.

George is at Bess's house and is helping with her new Caller ID. She remembers The Hardy Boys' number after Bess forgets it.

George is being driven crazy by Bess, who is worrying about getting a phone call from a cute guy she met. George helps Nancy by researching stenography.

George is being driven crazy again by Bess, this time because she is cooking (mostly burning) food after seeing a cooking show hosted by a cute guy. She is friends with Katie Firestone and worries about her well-being after Nancy informs her that Katie's boat was ransacked.

George and Bess invite Nancy to join them at their aunt and uncle's Shadow Ranch. But although Nancy arrives on time, Bess and George's plane is delayed in Omaha due to technical problems. Nancy has stumbled upon another case so they try their best to get to Arizona as soon as they can, but their next plane stops in St. Louis because of bad weather.

By the time they finally make it to the ranch, Nancy's already solved the case. However, she couldn't have done it without George's help through the phone with a puzzle involving George's book on nineteenth century clothing, a book George only bought because she was extremely bored.

George and Bess are at a sailing camp that doesn't allow cell phones. Before they set sail, George sends Nancy one last text remarking that Bess's plan to get the snobby Maxwell twins disqualified for being too tan -therefor setting a bad example for younger campers- isn't going to convince the camp director.

George is reluctantly helping Bess paint her room and gets annoyed when Bess accidentally dribbles "adobe beige" paint in her hair. To George's annoyance, Bess is so excited that Nancy's on a train full of celebrities that they're hardly getting anything done. Only when George threatens to go home and leave all the work to Bess does she finally focus- at least, a little.

George has miraculously convinced a reluctant Bess to go on a jog with her.

George doesn't go to New Orleans with Bess and Nancy because she has a soccer tournament she doesn't want to miss.

George is with Bess at the Dunhill's birthday pool party in River Heights. She is thrilled when a cute guy with amazing abs talks to her twice.

Bess wins an online sweepstakes for a five-day vacation in the Bahamas. She decides to bring George and Nancy along, but Nancy arrives a day late due to a father-daughter banquet she had to attend. When Nancy arrives, a frantic George informs her that Bess had been kidnapped. The whole contest was a hoax to get Nancy on the island and find a long-lost treasure for the kidnappers. As Nancy searches for Bess, George tries to repair a radio phone in order to call for help. When Nancy gets blocked into a cave, George comes to the rescue by solving a complicated puzzle to free her.

Players get to see and play as George for the first time in this game.

George and Bess appear in the opening cut scene when George gives Nancy a device for detecting bombs.

George is with Bess in Wisconsin at their aunt's cabin.

George is spelunking with Bess and Ned at the Carlsbad Caverns.

George and Bess travel to Kyoto, Japan to attend the Technology of Tomorrow Today expo. Nancy is also in Japan for a vacation offered by P.G. Krolmeister, whom she assisted in Trail of the Twister. George and Bess meet Yumi Shimizu, the local Bento booth owner and become good friends. They have a lot of fun together and send Nancy many purikura phone pictures of each other.

Bess mentions George has a new job, but doesn't mention what kind of job it is.

George has an internship at Technology of Tomorrow Today, the facility Nancy stayed in during The Deadly Device. Bess mentions she asked George to grow a beard, but -for some reason- George got angry at Bess for asking.

When Ned asks why he has to break into Nancy's house, she mentions Bess and George are out of town. Her code name at Cathedral is "Swift".

Her profile in the archives mentions that she does innovative work with the Jovic Center for Advanced Mechanical Studies.

Bess successfully enters George and Nancy in George's favorite show, Pacific Run. Early on, George is on a rickety rope bridge when it collapses, causing her to bump her head and break her leg. For the remainder of the game she is stuck in the medical tent. Unable to do much else, George does research on the show and its contestants for Nancy and puts her discoveries on her tablet.

The show's producer, Sonny Joon, wants George to take a look at designs for a machine he wants built while she's recovering. George and Nancy surmise that Sonny wanted her on the show because of her technological knowledge. George comments that the machine looks like some kind of map. At the end of the game, she calls Nancy with information she had figured out that helps Nancy and Sonny activate an ancient star map.

Message in a Haunted Mansion 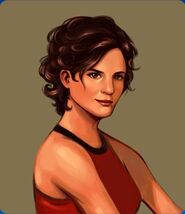 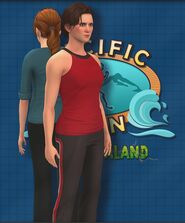 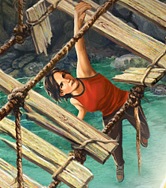 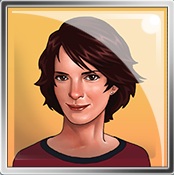 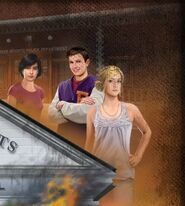 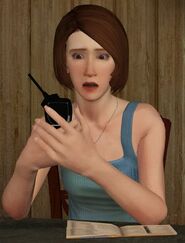 Add a photo to this gallery
Retrieved from "https://nancydrew.fandom.com/wiki/George_Fayne_(video_game_character)?oldid=17462"
Community content is available under CC-BY-SA unless otherwise noted.