Treasure on the Tracks
Isabelle DuPont is the French waitress on the Royal Express.

Treasure on the Tracks

Isabelle has to come work on the Royal Express in 2010.

Towards the end of the game, Frank and Joe find a box of items that she had stolen from the other guests. Isabelle reveals that she takes things but doesn't know why, and Joe guesses that maybe it has something to do with losing her mother at a young age. Isabelle says that the ballerina on her necklace was given to her by her grandmother, who told her that she is actually royalty and that she is a Romanov.

Frank ends up finding Anastasia Romanov and uniting her with Isabelle. 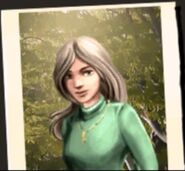 Add a photo to this gallery
Retrieved from "https://nancydrew.fandom.com/wiki/Isabelle_DuPont?oldid=11426"
Community content is available under CC-BY-SA unless otherwise noted.