In 2012, Jon is at the team's dig site where they believe they have found Nefertari. He is attacked during a sandstorm, and asks Nancy, who was job shadowing him, to investigate. Nancy fills him in on the case throughout the game. He was probably attacked by Abdullah or Lily, trying to cover up their smuggling racket. At the end of the game, Jon returns, having recovered, and stops Abdullah when Nancy is trying to escape the tomb. 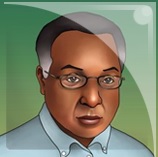 Add a photo to this gallery
Retrieved from "https://nancydrew.fandom.com/wiki/Jon_Boyle?oldid=11893"
Community content is available under CC-BY-SA unless otherwise noted.