Carson Drew (ex-boyfriend)
Karen Hart is a main character in The CW's 2019 television series Nancy Drew. She was a detective who dated Nancy's father Carson Drew. Karen Hart is portrayed by Alvina August.

Karen was a friend of Nancy Drew's family, and was close to Nancy's mother Katherine Drew. Some time after Katherine's death in 2019, Karen began seeing Nancy's father Carson, and they kept their relationship a secret.

As a detective, Karen and Chief McGinnis question Nancy and the others who were nearby when Tiffany Hudson was murdered. When Nancy later breaks into Ryan Hudson's home to find evidence against him, she accidentally leaves behind her hat as she escapes undetected. Karen finds Nancy's hat and takes it from the scene, giving it to Carson to destroy so that Nancy doesn't get in trouble and make herself look guilty. Nancy walks in on Karen and Carson kissing, and she does not take it well.[1]

Later, it revealed that she was the one who responsible for Lucy winning the Sea Queen competition by adding a fake ballot, thinking that it would help Lucy image. However, this wins is backfired as everyone now sure that the rumors about Lucy are true.

Karen about attempting to kill Ryan: I wanted to get justice for Lucy. She was my best friend. 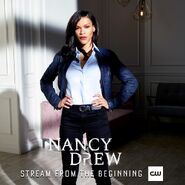