Fell off a cliff ( Accidental or Suicide which is Unknown )

“Dead Lucy. Horseshoe Bay's most infamous sea queen wore her crown for only one night. People say she still haunts our town.”
— Nancy Drew about Lucy

Lucy Sable is a character in The CW 2019 television series Nancy Drew. She died prior to the events of the series and some say she still haunts the town of Horseshoe Bay. As the ghost "Dead Lucy," she is portrayed by Stephanie Van Dyck, and as a teenager she is portrayed by Lizzie Boys.

Lucy was a beautiful young woman with wavy, shoulder-length blonde hair and big hazel eyes. She had a slim build and quiet demeanor after the months of bullying she was subjected too. For her sea Queen debut, Lucy wore a pink ball gown and a the signature sash of the winner, along with a crown. These were later the clothing that she died in. As a ghost, Lucy appeared in a drenched, torn dress that reached her knees. Her blonde hair was wet and covered the majority of her face. She looks like Nancy, since she is her biological mother.

Lucy was shown to be a kind, beautiful girl as a teenager as she once cared for Karen Hart, her best friend, and Ryan Hudson as he was her boyfriend. Though her death was a tragedy Ryan, he is still seen to be remembering her in the present as he spoke about her a lot and expressed his sadness to Nancy about how they were never to be seen together by his parents. They had a tendency to occasionally meet up with each other and go to their "spot " which was later shown to be the local ice cream shop prior to her death. Her mental health suffered after Ryan's parents spread rumors about her and Patrice lost her job at The Claw which is highly indicated she blamed Lucy for it.

Due to Lucy's withdrawal of herself, Karen secretly entered her into The Sea Queen Pageant which Lucy would later go on to win, but that only increased the bullying and 'slut shaming' she endured. At her breaking point Lucy decided that she would end her own life despite being pregnant. Stealing a steak knife from The Drews to do the deed however she seemed to wrestle with choice as she arranged to meet up with Ryan at the ice cream parlor for the last time only for him to never show up, but it was only after being threatened by his father. She decided to ended her life that day. However, Lucy went into early labor when she arrived on The Bluffs and called the only person she trusted - Kate. Due to her hysteria right before her death, Carson would later tell Nancy that he's unsure if Lucy slipped or fell to her death when he and Kate took their eyes off Lucy for an moment. However, whatever the nature of her death was caused Lucy to carry the trauma of it into her afterlife resulting her being stuck in Horseshoe Bay.

Lucy and Karen Hart used to be good friends, but their friendship ended in high school prior to Lucy's death.[3]

Lucy and Ryan dated for a summer. He took her to a party, where Lucy saw Celia Hudson and Sebastian Marvin together, and Celia threatened Lucy. Lucy later wrote an encoded poem about the encounter.[4]

In 1999, Lucy participated in creating a time capsule with her high school. The time capsule included a video depicting high school life, including a brief clip of her interacting with Ryan Hudson.[3] It also included the poem Lucy wrote about the party.[4]

In 2000, Lucy died apparently due to falling from a cliff's edge into the ocean after being stabbed. A bloody knife and tire tracks were found at the scene.[5] Her body was never recovered.[6] Some of her remains were recovered and kept in the morgue, including a piece of her broken crown with strands of hair, and her blood from the rocks.[7]

Lucy's younger brother and mother moved away shortly after her death.[8]

When Tiffany Hudson is murdered, a recording of her death looks like the ghost of Lucy Sable might have killed her, leading Nancy Drew to investigate both Tiffany's recent murder and Lucy's death from nearly twenty years earlier. Nancy, George Fan, and Bess Marvin visit the medium Harriet Grosset to ask about Tiffany, but Grosset apparently becomes possessed by Lucy's ghost and says, "Find the dress." When Nancy later finds a bloody dress in an old trunk in her attic, Lucy's ghost seems to be present.[9] Nancy requests the cold case file from the police, but her request is denied. When Nancy later breaks into the morgue to get a sample of Tiffany's blood, she finds the box of what was retrieved from Lucy's death and steals the evidence for her investigation.[10]

Following her various visions of Lucy's ghost, Nancy begins to think she's either hallucinating or haunted. Ryan Hudson also begins having visions of Lucy's ghost.[11] Nancy later learns that Lucy is her biological mother. She died after Nancy was born. Lucy gave her to Carson and Katherine Drew before she died, begging them to keep her child safe from The Hudsons. Lucy presumably committed suicide by jumping off the cliffs, leaving behind only her tattered dress.[12]

With Lucy's death solved, Nancy reluctantly returns her bones to the Aglaeca, who promptly sends them back as she isn't appeased with their offering. Nancy visits Carson and asks him to accompany her to say goodbye to Lucy. They venture to Sylvan Woods to bury her bones, which Nancy has placed in a box. Lucy’s tombstone in the cemetery gets vandalized every year, so Nancy thinks Lucy would have wanted her bones buried somewhere else. Nancy chose the area as Lucy wrote about loving the area in her journal. Ryan is present and places a photo strip of him and Lucy on the box. Together, the men dig a grave while Nancy traces Lucy’s previously engraved symbols on a tree.[13]

The Haunting Of Nancy Drew (Known last words) : "Don't let the Hudsons find out about her, take care of my baby." 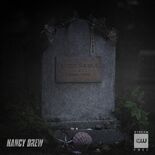 Lucy's Photo in a yearbook

Lucy's appearance in flashback or as a ghost: