Peter Dylan O'Connor
Matt William Simmons is a freelance writer for travel and sailing magazines, and was the groom of Kyler Mallory in 2008. He had met Kyler through their mutual friend, Kit Foley.

Matt and his fiance Kyler Mallory plan to get married at Castle Malloy in Bailor, Ireland. One day during the wedding preparations, Matt disappears. Kyler clings to the belief that he is just playing a practical joke, since he loves to play such pranks, but nevertheless asks her maid of honor, Nancy Drew, to find him and teach him a lesson. Kyler comments to Nancy that she sometimes hears Matt's voice around the castle, always very faint and very muffled. She thinks he's teasing her "the lout". However, when Nancy finds Matt's broken glasses in the nursery, she grows truly worried since Matt can't see two feet in front of him without his glasses. Nancy calms her, saying it all could still be an elaborate practical joke. Kyler sure hopes so, telling Nancy that once they are married that will be that. No more practical jokes for Matt. Ever.

When Nancy asks Matt's best friend, Kit Foley, what he thinks about Matt's disappearance, he tells her that he thinks Matt left on purpose because he got cold feet, telling Nancy that "for Matt, marriage is way too much, way too soon". The castle's elderly caretaker, Donal Delaney, firmly believes that Matt was kidnapped by the Good People (also known as faeries) because not only did Matt, a British man, dared to wed Kyler, an Irishwoman, at Castle Malloy, but he also dared to stay in Fiona's abandoned nursery room, which angered the Good People -and Donal- greatly.

In truth, as Nancy discovers, Matt had been attempting to sound like a ghost in the nursery fireplace to scare Kyler when a crow flew at him, startling him, knocking his glasses off his face, and causing him to fall into a passageway that lead to Brendan Malloy's hidden laboratory. Somehow Fiona found him down there and appeared to enjoy keeping him as a sort of pet, occasionally feeding him by dropping carrots and potatoes down through the silo doors. When Fiona drops her down another passageway that leads to the old lab, Nancy finally finds Matt, who feels horrible for putting Kyler through such worry, saying that he is so lucky to have landed such a smart and beautiful woman and that he is so stupid for risking it all for a stupid prank. When Nancy asks why Kit isn't his best man even though he's his best friend, Matt explains that he knew Kit still had feelings for Kyler, whom he once dated, and Matt didn't want to put Kit through that kind of awkwardness.

Nancy manages to force open the silo doors by launching a rocket, drawing the attention of Kit and Kyler. She and Matt are overjoyed to be reunited and call to one another how much they love each other. Once Matt and Nancy are freed from the lab, Matt and Kyler are happily married right on schedule.

Matt is a prankster, always looking for an opportunity to play a joke on someone, even his wife-to-be. So notorious was his love of pulling practical jokes that when he disappears days before his wedding, everyone thinks its just another joke. He also apparently can be argumentative, as he apparently shares many fights with Kyler. Despite this, he loves Kyler very much and feels awful that he almost ruined their wedding. The experience may even have been enough to put him off pulling pranks 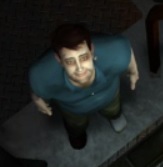 Retrieved from "https://nancydrew.fandom.com/wiki/Matt_Simmons?oldid=13190"
Community content is available under CC-BY-SA unless otherwise noted.