Midnight in Salem is the thirty-third game in the Nancy Drew adventure series, and the first game in the "revival era." Based on the novel The Witch Tree Symbol, it sees Nancy trying to clear the name of Deirdre Shannon's cousin in an arson case in Salem, Massachusetts.

Originally announced in May 2015 at the end of Sea of Darkness, the game was initially set to be released in Fall 2015. However, in August 2015, Her Interactive announced the game would be delayed to revamp the series under the Unity engine. After numerous delays, the game was finally released on December 3, 2019.[1]

The game recieved mixed reviews, with most of the criticism going to the graphics, glitches, plot holes, and other errors in the game.[2] Fans have panned the game as a setback from previous games in the series.

Nancy Drew unexpectedly finds herself in Salem, Massachusetts investigating an arson on the Hathorne estate. The Hathorne House was originally constructed by Judge John Hathorne, inquisitor of the infamous Salem witch trials and the final home to 102-year-old Frances Tuttle, his last direct descendant. When Tuttle passed away, the estate became city property and while the mayor was seeking a manager to oversee the estate the home burst into flames. The ongoing investigation has turned up little evidence but concerned citizens have accused Mei Parry of arson and are pressuring the police to arrest the secretive teenager. As Nancy races to uncover the truth behind the arson, she discovers connections to the house’s past with the Salem trials and finds herself drawn into a struggle with supernatural events that she simply can’t explain. Nancy’s convictions are put to the test. Are the ghosts real? Has Salem’s dark history come to life, or is there someone else to blame? Time is short, and Nancy must find the answers before the clock strikes midnight.

The game was initially set for release in 2015, but on August 19, 2015, Her Interactive announced that Midnight in Salem would be delayed until Fall 2016 at the earliest due to them switching to the Unity engine and the launch of Codes & Clues.[3] After a delay in the release, Her announced on December 19, 2017, that the game would release in Spring 2019. The release would be for PC and Macs as in the past, but has the potential to expand to tablets, consoles, and virtual reality platforms. 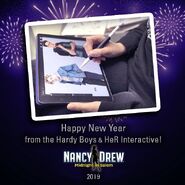 Games by HeR Interactive