$30,666,930
Nancy Drew is a feature film based on the characters created by Carolyn Keene. The story follows Nancy (Emma Roberts) as she accompanies her father Carson (Tate Donovan) to Los Angeles on one of his business trips and stumbles across evidence of a long-unsolved crime involving the mysterious death of a beautiful movie star, a mystery too good for the young super-sleuth to resist.

With her magnifying glass and fingerprint powder in hand, Nancy Drew (Emma Roberts) leaves River Heights for La-La-Land. She’s out to solve one of the greatest mysteries ever: the death of movie star Dehlia Draycott.

But the bigger mystery is how our perky, plaid-clad sleuth will fit in with the text-messaging teen queens of mean she meets at Hollywood High.

Nancy Drew (Emma Roberts) and her widowed father, Carson Drew (Tate Donovan), move from River Heights for a few months and rent a house in Los Angeles, California, where Carson has a temporary job. Nancy chose their California house because it was the home of Dehlia Draycott, a murdered movie star based on Natalie Wood whose case has never been solved. Despite the mystery, Nancy's father has forbidden her from further sleuthing and encourages her to focus on high school and being normal. Nancy struggles to fit in at her new school, only befriending a younger boy, Corky (Josh Flitter). She realizes that the sleuthing world is the only place she fits in and decides to solve the Draycott mystery. In the Draycott mansion, she discovers a letter that Draycott wrote to an unknown "Z", who was supposedly Draycott's love interest. From photographs of Draycott before her death, she figures out that just before her death, Draycott had a child and gave it up for adoption in privacy. She learns that the child, Jane Brighton (Rachael Leigh Cook), is the sole beneficiary of Draycott's will, which has disappeared. Nancy receives a threatening phone call telling her to get off the case, and contacts her father's business associate, Dashiel Biedermeyer (Barry Bostwick), the lawyer of the Draycott estate, to assist her with the case.

Meanwhile, as an early birthday present, Nancy's father presents her with the blue Nash Metropolitan convertible she left back at home in River Heights. Along with her roadster comes her long-time boyfriend, Ned (Max Thieriot). Ned understands her persistence in sleuthing and finds himself assisting Nancy with the Draycott mystery. Corky becomes jealous of Nancy and Ned's close relationship and tries his best to get Nancy's attention. At one point, a bomb is left in Nancy's roadster. Nancy manages to remove it and though she is knocked unconscious in the blast, she soon comes to consciousness. The trio spend numerous hours together, discovering an underground passageway to a neighbor's basement, which is rented by Leshing (Marshall Bell), the groundskeeper to the Draycott estate.

One afternoon, a tearful Jane arrives on Nancy's doorstep and announces that her daughter has been taken away from her on false charges of child endangerment. She reveals that after Nancy's initial visit, a man showed up on her doorstep to threaten her. Nancy demands that her father take up Jane's case. He agrees as Jane stays with them. While watching a Dehlia Draycott film, Nancy realizes that Draycott must have hidden her revised will in a prop from one of her movies. She tracks the will to a Chinese antique shop, but just after retrieving it, Nancy is chloroformed into unconsciousness from behind and kidnapped by the villain's henchmen, and left in a locked room. Naturally, Nancy escapes, but gets into a car crash and must go to the emergency room. Her father, along with Biedermeyer, arrives and demands to know what is going on. She admits to her secret sleuthing and explains about Draycott's hidden will. Biedermeyer offers them a ride home so he can sign a business deal with Mr. Drew. Nancy discovers that Biedermeyer is the one who was disinherited by Dehlia's will (signing his papers with a large "Z" as his middle name is Zachary), concludes that he is Dehlia Draycott's supposed love. However, when he questions Nancy about the will, she manages to jump out of the moving car, leaving her father with Biedermeyer and his men. Nancy manages to make it all the way home and is caught by Biedermeyer who threatens to "squeeze the will out of her." Nancy asks him why he killed Dehlia and he replies that Dehlia went a bit crazy after her reappearance, that Jane is not his daughter, but Leshing's, and demands the will. Nancy kicks Biedermeyer in the shin and escapes, but is once again cornered by Biedermeyer and his henchmen. Leshing arrives via the secret passageway and knocks the henchmen unconscious and Nancy reveals that she secretly recorded what Biedermeyer told her. While police arrive at the house and arrest Biedermeyer, Nancy tells Leshing he's Jane's father and he tells Jane and she hugs him for the first time of her life. The will is restored to its rightful owner. Jane is able to get back her daughter and converts the Draycott mansion into a home for single mothers as the Drews return to River Heights.

As Nancy watches a video sent by Jane and her new Draycott Home for Single Mothers, she is a bit sad that the mystery is over. She goes outside to see Ned repairing her car. They talk and they both lean in for a kiss. Right after Nancy and Ned kiss, her father tells her that she has a long-distance phone call for a new mystery in Scotland. She is just as cheerful as ever as she runs back into their River Heights home. 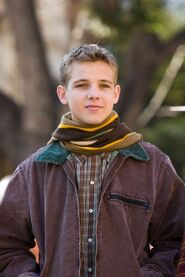 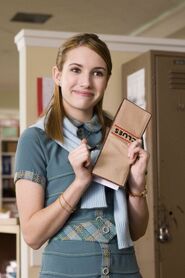 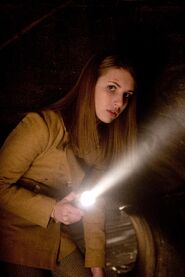 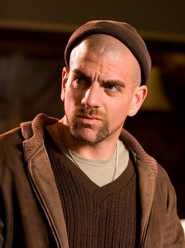 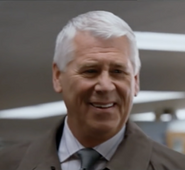