This page is for the book character. For the 2019 TV series character, see Ned Nickerson (2019 character).

The Clue in the Diary

Ned Coleman Nickerson is a fictional character in the Nancy Drew Mystery Stories series. Ned is often referred to as Nancy Drew's boyfriend. He first appears in The Clue in the Diary, the seventh volume in the series.

Ned is described as a handsome and athletic young man who stands six feet and two inches tall, with dark brown hair and brown eyes. When Nancy first meets him, he is a sophomore at Emerson College. This makes him a year or two older than the eighteen-year-old Nancy. Aside from being a good student, Ned also plays for three of his school's varsity teams - basketball, baseball, and football. He is also a member of the Omega Chi Epsilon Fraternity. His best friends include Burt Eddleton and Dave Evans, who are also students at Emerson.

Ned frequently sells insurance during the summer, although he has also taken a variety of other jobs such as lifesaving as mentioned in Two Points to Murder .

Ned lives with his parents James and Edith in the town of Mapleton. Mapleton is near Nancy's fictional hometown of River Heights.

Ned first meets Nancy in The Clue in the Diary, the seventh volume in the original series. However, the text of revisions in the first few volumes bear an apparent inconsistency, mentioning him as early as the fifth volume, The Secret of Shadow Ranch.

In The Clue in the Diary, Ned is at first mistaken for a car thief, but Nancy warms to him after he proves trustworthy later in the story. Throughout the revised yellow hardcovers (which include the first 56 books of the series), Ned is often described as Nancy's "special friend." The two frequently date, attending dances and the like, but commitment between them is never explicitly stated. However, in the paperback editions that followed (books 57 to 175), Ned is specifically described as Nancy's boyfriend.

Whenever he is around, Ned assists Nancy with her cases. This usually results in his saving her from a life-threatening situation. Ned often visits Nancy when he is home from college, but sometimes Nancy also visits him at Emerson. The two have also traveled extensively together, sometimes for an educational trip for Ned, or a case for Nancy, or just a vacation for both. Ned evidently admires and cares for Nancy, and he often expresses his concern for her safety throughout the series.

Ned is presented as Nancy's boyfriend in this series as well; however, unlike the original series, it is mentioned that they have been dating since high school. As the Files is also targeted at an older audience, their relationship is imbued with a little more depth. Ned and Nancy express somewhat more physical and emotional intimacy, but some stories also involve them fighting and even breaking up (the reason for which is usually connected to the case Nancy happens to be working on, often because Nancy's main suspect is one of Ned's friends). In several instances, the two also end up dating other people. Fidelity, as well as Nancy's apparent lack of time to spend with Ned because of her cases, sometimes becomes an issue between them. However, in the end they always make up.

In volume twenty-four, Till Death Do Us Part, Ned proposes to Nancy even though the probability is that she will reject him. He does this because he wants to keep a promise he made to himself about Nancy being the first girl he will ever propose to, and the situation at the time called for him to propose to another woman.

Save for several books, Ned is almost completely absent from this series, which is targeted at a more mature audience. The first book, New Lives, New Loves, called for readers to dial in an 800 number to decide whether or not Ned should be kept as Nancy's boyfriend. Apparently, the readers answered in the negative, as the following books featured Nancy with a new boyfriend, Jake.

In one of the later books, Ned reappears dating Bess Marvin, one of Nancy's best friends. However, their relationship does not work out.

The series, possibly for the lack of readers, continued for a very short time, and stopped after 25th book.

A 9-year-old Ned appears in one book, The Lost Locket, in this series targeted at younger children. It is particularly unusual in that Ned never meets Nancy in any of the other series until they are much older.

In the Nancy Drew games presented by Her Interactive, Ned can be called and can give hints. A nice twist in the game shows the caring relationship between Nancy and Ned through their conversations. Ned supports Nancy, even though he doesn't approve of her fearlessness in life-threatening situations. 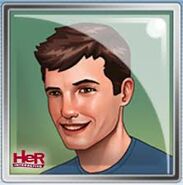 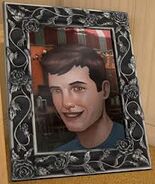 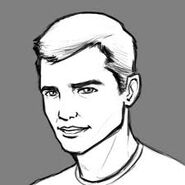 Max Thieriot as Ned Nickerson in the Nancy Drew 2007 movie

Tunji Kasim as Ned Nickerson in The CW's 2019 TV series
Add a photo to this gallery
Retrieved from "https://nancydrew.fandom.com/wiki/Ned_Nickerson?oldid=7335"
Community content is available under CC-BY-SA unless otherwise noted.