Mechanic
Co-manager of The Claw

Ned "Nick" Nickerson is a main character in the CW's 2019 television series Nancy Drew. He was Nancy Drew's secret boyfriend. He is portrayed by Tunji Kasim.

Nick is a young man in his late teens with deep brown eyes and black hair. He wears relaxed clothing such as jeans, a basic shirt, and a flannel. During his time as a mechanic, Nick often wore stained and tattered clothing, though after his purchase of The Claw, he began wearing newer clothing.

Ned Nickerson, better known as "Nick", is the only child of Millicent Nickerson. He was dealt a poor hand in life following an incident with his friends. Nick was partying with his friends in Florida, when a jock named Austin came onto Nick's date. Despite the girls obvious discomfort and friendliness with Nick, Austin wouldn't let up and told Nick to go inside without them. Nick knew that the situation could turn into one of sexual assault and refused to leave the girl's side. Nick and Austin got into a physical altercation. During the fight, Austin went out a glass pane window and died. Nick was arrested for the death of Austin and charged with manslaughter. He was represented by the legal council of Carson Drew. An anonymous witness gave a testimony that allegedly proved Nick murdered Austin. This testimony sent Nick to prison for a crime that was committed in self-defense. He was bitter over the conviction but was kept on the straight-and-narrow by his social worker, Katherine Drew, who happened to be the wife of Nick's legal council. Katherine's persistence helped Nick agree to a meeting with the witness who put him away, now aware her identity was the millionaire socialite Tiffany Hudson.

Nick's resentment for Tiffany grew and he refused to speak to her for several visits, though she was able to communicate with him through literature. She apologized for her fake testimony and they built a friendship that he valued while serving the remainder of his sentence. Nick was eventually released from juvenile prison and his records sealed as the crime was committed when he was a minor. He hoped to rebuild his life and relocated to Horseshoe Bay, Maine, where he kept in close contact with Tiffany. He was aware of her schemes to bring down the Hudson family. He was hired as a mechanic at a local shop, where he met fellow townee Nancy Drew. The two began a no-strings-attached relationship, though Nick longed for a closer relationship with the girl detective. 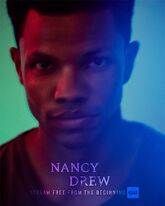 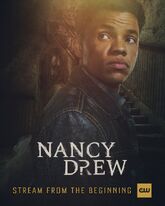 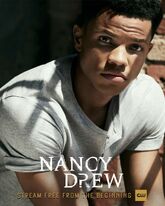 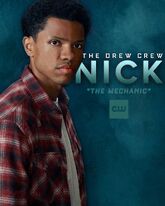 Nick appears in every episode of season 1. As a lead character, he is anticipated to appear in most episodes of season 2.

Retrieved from "https://nancydrew.fandom.com/wiki/Ned_Nickerson_(2019_character)?oldid=26219"
Community content is available under CC-BY-SA unless otherwise noted.