Patrick's girlfriend, Leena Patel, enters them in a competition called Pacific Run in 2014. When Nancy asks him if there's something weird about the competition, he says the weird thing is that he is there because he doesn't like competition. When Nancy points out he was a rugby player, he doesn't understand the connection.

When Nancy or Bess try to talk to him, he often doesn't know what to say and offers them crackers, which is what he does when he doesn't know how to continue a conversation. When Leena makes him try to go in the water, he refuses because he's afraid of swimming, saying that he sinks like a gorilla.

Patrick's parents were mystical teachers, but he didn't feel like he fit in with his family because he really understand what they taught, and felt that his river of life is pulling him in other directions. When he retired from rugby, he said he felt like he was "stuck in the river".

Near the end of the game, when Patrick finds Nancy and Sonny trapped in some underground caves, he also sees the deep body of water Nancy and Sonny are in front of. Patrick realizes that he can use his talent for sinking and dives in, and -actually walking on the lake floor- finds a lever that drains the water level and reveals the final piece of the artifact Sonny was looking for. He decides to conquer his fear of water after the game ends.

Jamila El-Dine tells Nancy that she met Patrick in the desert (of Egypt probably) and says that he told her he was "lost in the desert. Isn't that funny?". She relayed this story to Sonny and he became excited, knowing that Patrick, a person who remains calm no matter what the situation was, is one of the people he needs for his plan. 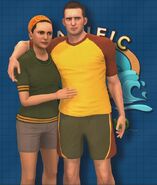 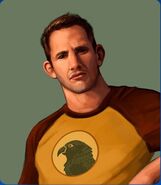 Add a photo to this gallery
Retrieved from "https://nancydrew.fandom.com/wiki/Patrick_Dowsett?oldid=14124"
Community content is available under CC-BY-SA unless otherwise noted.