Ryan Hudson is a main character in The CW's 2019 television series Nancy Drew. He is the husband of murder victim Tiffany Hudson and the biological father of Nancy Drew and he would be a prime suspect if he didn't have a solid alibi. Ryan is portrayed by Riley Smith.

Around 1999, Ryan began seeing Lucy Sable, but the two kept their relationship a secret. Unknown to Ryan, his father threatened Lucy to get her to break up with Ryan, making Lucy's mother lose her job and spreading rumors about Lucy. Lucy finally caved and ended her relationship with Ryan, which devastated him. Ryan went to meet Lucy on the night she died, but he didn't make their meeting in time and missed her. 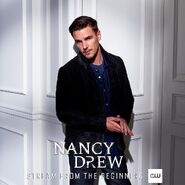 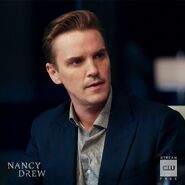 Retrieved from "https://nancydrew.fandom.com/wiki/Ryan_Hudson?oldid=21885"
Community content is available under CC-BY-SA unless otherwise noted.