The CW greenlit a third season of Nancy Drew to allow the production teams of not only Nancy Drew, but other shows, to map out the season ahead of time due to the ongoing COVID-19 health crisis. CW president Mark Pedowitz said, "Though we’re just a few weeks into the new season, we wanted to get a strategic head start on next season with these early renewals, which allows our production teams to start laying out story arcs and hiring staff, and at the same time, continues to provide us with a strong, stable schedule to build on for next season." 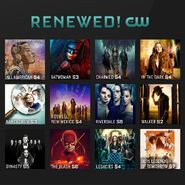 Retrieved from "https://nancydrew.fandom.com/wiki/Season_3?oldid=25658"
Community content is available under CC-BY-SA unless otherwise noted.