This page is for the original version of the game, which is discontinued. For the remastered version that is avaliable, see Secrets Can Kill (remastered).

Secrets Can Kill is Her Interactive's first Nancy Drew adventure game and the first computer game based on the Nancy Drew character. The game was released on November 23, 1998, and took its basis from Nancy Drew Files #1: Secrets Can Kill. In the game, Nancy is visiting her Aunt Eloise in Florida when a student at the local high school is murdered. Nancy goes undercover at the school to find the killer.

In celebration of the Nancy Drew character's 80th anniversary, Her Interactive announced in May 2010 that Secrets Can Kill would be remastered into an all new game. Secrets Can Kill: Remastered was released in August 2010, with the original game being discontinued at the same time.

Read between the lines to expose a killer!

A family visit throws you, as Nancy Drew, into the scene of a crime that happened just last night! You are taking a nice summer vacation in Florida with your Aunt Eloise and while you're there, a student at Paseo Del Mar High School - where Eloise works as a librarian - is murdered in the school itself. Now Jake Rogers is dead, and a secret died with him - or did it? Although the police are looking into the matter, Eloise asks you to investigate as well, so you must go undercover to solve the case. Roll up your sleeves and dig into an engrossing mystery that is full of places to explore, puzzles to solve,, suspects to question, danger to evade and evidence to evaluate. A wily killer may be on the loose...so keep your wits about you.

Nancy only encounters four students, three of which are actually in the building. It is most likely after school, and these people are just hanging out. Nancy also seems to be wearing funky vision goggles that make her see people in two dimensions.

Daryl is the student body president and works at Maxine's Diner. He found Jake's body and is the only student who knows that Nancy is investigating the murder.

Connie is somewhat evasive. She didn't like Jake, but says no one liked him.

Hal is a Japanese exchange student who's studying to be a doctor. If he does not get a scholarship, his parents will bring him back to Japan, so he uses almost all his time for study. His real name is difficult to pronounce, so he shortened it to "Hal".

Hulk is the school's best athlete. A bit pushy and arrogant, he prides himself on his ability to play football and intends to be a pro player.

The phone is located in the Student Union at the school. To activate it, you'll need the phone card from the right drawer of the desk in the first room of Aunt Eloise's house.

Bess is one of Nancy's best friends. She offers Nancy advice and hints.

George is Nancy's other best friend, and also offers her advice and hints. She and Bess are cousins.

Ned is Nancy's boyfriend, and also offers her advice and hints.

Also, you might like to try some other numbers in the game, such as the pizza place, the drug depot, Maxine's Diner, Aunt Eloise's house (the number on the phone card), and the police department.

Box opened containing two discs along with detective handbook as well as a guide. 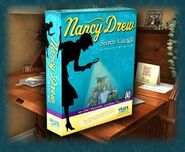 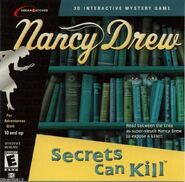 DreamCatcher version
Add a photo to this gallery

Retrieved from "https://nancydrew.fandom.com/wiki/Secrets_Can_Kill_(Video_game)?oldid=22614"
Community content is available under CC-BY-SA unless otherwise noted.