Secret of the Scarlet Hand
Danger by Design
The Phantom of Venice
Ransom of the Seven Ships
Resorting to Danger!
The Captive Curse
Tomb of the Lost Queen
Sea of Darkness

Jamal Fahim
Sonny Joon is a very mysterious character, and the only person who could keep one step ahead of Nancy (that is, until The Shattered Medallion).

An eccentric young man, Sonny is well-known for his many short-lived jobs (usually right before Nancy arrives) and his doodles that sometimes help Nancy.

In 2002, Nancy explores her new desk as an intern at Beech Hill Museum in Washington D.C. and uncovers a notebook of doodles by "Hurricane Sonny", as Sonny had been the previous intern. It is also clear that he is obsessed with Koko Kringle bars, has a passion for aliens and preferred to write about how they abducted the Mayans and then artistically depict this instead of doing any actual work.

Sonny keeps dissertation notes on this topic under the "Stuff to Work On" section of his diskette. He writes about wanting to produce an adventure game called "Temple in the Sky". Henrik mentions later in the game that he is very afraid of the coatimundi, who he depicts as the "Koko Kringle Bandit".

In 2006, Nancy discovers yet another desk full of Koko Kringle bars and odd doodles, this time in Paris, France at Minette's House of Design. The computer desktop also reveals that Sonny Joon had previously worked there. A sticky note near a Koko Kringle advertisement says "Buy 200!". The newspaper that appears if Nancy fails to stop the paint bomb reveals that 200 boxes of Koko Kringles were delivered to the moulin around Christmas 2004.

The Phantom of Venice

Sonny is actually in Venice at the same time Nancy is in 2008, working as a Carnevale Apprentice at Maschere di Rovati (this information is revealed in The Captive Curse). He witnesses the stakeout of the phantom and the newspaper the next day says that he saw the phantom preparing to flee. Helena meets him before she meets Nancy and writes about him in her notebook:

"Weirdest American I ever met. Glasses forever halfway down his nose due to thick heavy lenses. Spiked, unnaturally colored hair (green and pink that day). Compulsive doodler. Very observant, very smart, very hyper. Is determined to find work on the International Space Station because he's already held (and lost) every job there is on Earth. Probably wasn't exaggerating. Was on his way to the Caribbean." (Referring to Ransom of the Seven Ships)

Sonny works at the Monkey Research Center, on dread Isle in the Bahamas, some time before it closes down in 2004 and leaves copies of his Research Notes behind for anyone who wants to study them at the resort.

Helfdan's computer desk has "Sonny wuz here!" scratched into it, along with an alien in its own ship in Sonny's style for some reason. However, the Redondo is not on Sonny's resume (as it is ambiguous about if the Dossier and Adventure game series are in the same universe).

The guest records state that a "Joon" stayed in Nancy's room before, but it was not known whether this was Sonny Joon or not.

During the "Where's Sonny?" contest, Her Interactive mentioned he had been to Kyoto, most likely confirming that this was him.

In 2011, Nancy finds Sonny's resume in Karl Weschler's office. It states that he has also worked with Kingston University's archaeological team in Memphis, Egypt (however, there is strangely no evidence of this when Nancy joins the team) and at Science of Tomorrow Today in Colorado Springs (hence Mason using a mousepad with his field research notes design on it). He had also worked for Krolmeister, Paranormal Tours in Salem, Mystery Cruises in Miami and been a DJ Intern for The Wolf Show in Chicago.

In 2012, Jamila El-Dine has pamphlets from S.P.I.E.D., or Strange Phenomenon Investigators - Extraterrestrial Division, that she got from Sonny Joon. Appearantly, after losing every job in existence, Sonny decided to become an entreprenuer and make his own. He now has a class called "Are You Alien or Alie-out?" and is the Chief Exobiologist of SPIED. Jamila also has his second book, "Visitors From the Skies", and Nancy can read some of it. Jamila tells Nancy that Sonny has spoken to the Annunaki and that they are coming to Earth. Jamila eventually confesses that her belief in aliens was just a ruse, and a letter from Sonny says that she was not a member of SPIED, but she still knows that Sonny is "special" somehow. She also says that he will find Nancy when the time is right.

In the air ducts of Technology of Tomorrow Today, letters are randomly placed on the walls. If one explores the whole area and finds all of them, they can be put together to spell "Sonny Wuz Here". He probably placed them there when he worked there.

In 2014, Sonny is the showrunner (host) for Pacific Run: New Zealand.

When Bess first applied to Pacific Run, Nancy and George were rejected. However, a couple weeks later, she got a letter back stating that there was a mistake, and that they would be on the show. This is where they met Sonny.

One of the other contestants, Kiri, tells Nancy that Sonny isn't actually supposed to be running the show. When Nancy confronts him about this, he immediately admits that the main producer plane was diverted, their passport paperwork was filed incorrectly, and that this job isn't going on his resume. Sonny also keeps sending the crew around the country on various little missions. When a rope bridge collapse injures George, Nancy asks her to look into everywhere they had seen Sonny before.

In addition to his deception, Sonny keeps sending Nancy mixed signals about not being allowed in the producer areas, but he wants her to find what he's laid out for her at the same time. Sonny also wants George to look at designs for a machine while she is recovering. George says it appears to be like some sort of compass.

Nancy and George eventually figure out that he's favoring certain teams on the show. In Sonny's tent, Nancy finds a letter from Jin Soo Seung, Sonny's grandfather, telling him that he must go to New Zealand right away to find an artifact that will send a "beacon", marking a step in humanity's evolution for the "Testers" of humankind to witness. Jin also explains that the Joons are actually Annunaki, and believes that the idea that they are aliens is just disinformation. He founded S.P.I.E.D. for that purpose. Jin is also following a lead of his own in the Nordic countries.

George finds out that Sonny's real name is Seung Joon and writes on her tablet: "You were right! We've seen Sonny in a lot of places. He was an intern at Beech Hill in Washington. He worked as an intern for Minette's House of Design... which makes sense. He visited Ca' Nascosta with Margherita. He studied monkeys at Dread Isle, and apparently spent some time in air ducts in Colorado. Who hasn't? He was at the Kingston Dig in Egypt. I'm guessing this is where he met Jamila." George and Nancy figure out that Sonny has brought the teams he's favoring onto the show because they have specific talents that he needs, George being the technophile and Nancy being the one who gets all the answers.

Nancy uses her outside line call to talk to Jamila, who explains that she had gotten involved with S.P.I.E.D. since Nancy had last seen her and tells Nancy that the classes they teach don't actually have any useful information, but the real research begins behind the scenes. She had met Sonny in the desert, and he had already known who she was, saying that he brought her there. He had also orchestrated Nancy being brought there, and finding Nefertari was her "test". Jamila tells Nancy that Sonny had called her recently, saying he was going to go through with his plan, but people could get hurt.

Jamila says that when Sonny was younger, he got really sick and was in bed for a long time. His mother let his grandfather see him during that time, even though she had been previously resentful that he was always exploring and going away. Jin drew comics for Seung about a boy named Sonny and a team of people with certain skills needed to find pieces of an ancient artifact. The letter Nancy finds says that he must be Sonny now, and find the artifact. The comic shows real places in the area that Nancy goes to, and starts off with a rope bridge being cut with Sonny on it, possibly alluding to that being his accident. When Nancy talks to Sonny about S.P.I.E.D., he says that she's already been a member for a few years, but they are kind of slow on alerting people to their membership.

When Nancy wins the competition and has found all the artifact pieces that Jin hid, George figures out the machine and helps Nancy and Sonny find the place where the beacon should be assembled. Nancy uses the comic to figure out how to put it together and it lights up a pattern of stars on the cave ceiling.

After the show is over, Sonny takes the beacon to study it further and leaves Nancy with the line "I'm running away now. Please don't tell anyone which way I went".

Sonny worked at the Cultural Center, as mentioned in Soren's notes, but was fired within five days. However, he asked for two week's notice and continued to work, stating that this was only valid if the person was quitting. Soren also suggests that Sonny stole a teddy bear.

In the Bonus Edition of the game, Nancy can locate and find a comic written by Sonny entitled, "The Factually True Adventures of Sonny Joon and Cyborg Nancy". In the comic, Sonny wonders about how nothing has turned up and maybe "the old man" was wrong about Iceland. 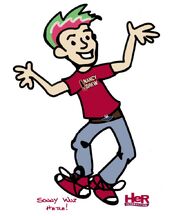 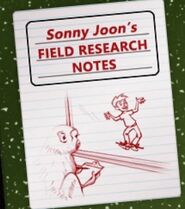 Sonny's journal from Ransom of the Seven Ships 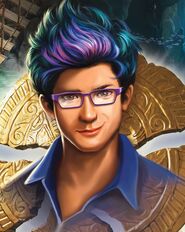 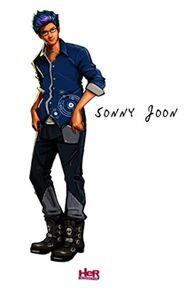 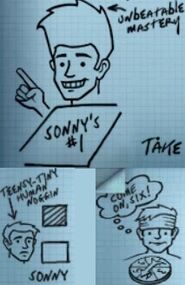 Add a photo to this gallery
Retrieved from "https://nancydrew.fandom.com/wiki/Sonny_Joon?oldid=25025"
Community content is available under CC-BY-SA unless otherwise noted.