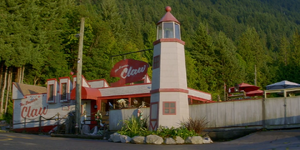 The Bayside Claw, more commonly referred to as "The Claw", is a diner owned by George Fan and Ned Nickerson. It is the regular hangout of the "Drew Crew."

George's maternal grandparents used to supply the restaurant with Fish until the actions of their daughter Victoria ruined it for them luckily for George, Dawn didn't hold that against her years later when George needed to become the breadwinner for her family to provide an steady income when no other place in town would hired her because of Victoria.

Nancy and Tiffany Hudson outside the Claw.

Retrieved from "https://nancydrew.fandom.com/wiki/The_Claw?oldid=23891"
Community content is available under CC-BY-SA unless otherwise noted.