The Clue in the Captain's Painting

Ramsey Nickell
"The Clue in the Captain's Painting" is the eighteenth and finale episode of season 1 of The CW's 2019 television series Nancy Drew. It first aired on April 15, 2020.

SPRING FINALE – Nancy and the Drew Crew investigate a mysterious death which also leads to new details regarding the Aglaeca curse.

Act 1: Nancy is in the Horseshoe Bay PD being interrogated about the murder of someone close to her. Lisbeth is gently trying to find out what happened to Owen, but Nancy is too shocked and grief-stricken to help. Bess is also at the station trying to manage her family. as Lisbeth heads out to see her. Lisbeth thinks if she was at the party she could have prevented Owen’s death, and as she walks away Bess is stuck with her family who wants to plan Owen's service. Nick and George are waiting on a bench outside, and her knee is shaking from anxiety, but when Nick lays his hand on her knee to try to calm her down, she pushes him away.

Act 2: Nancy goes to her house with her friends. When they sit down to discuss what to do, the crew realizes that if the Aglaeca came for Owen, she’s definitely coming for them next. So they decide to contact Owen from the afterlife so he can tell them what happened after he received the latest portent but before she killed him. It’s the only chance they have of trying to stop the curse. So, they set up another seance however Ryan arrives. He heard what happened to Owen and wants to “check in with Nancy, but she quickly shuts down the father/daughter bonding session by telling him to go. In her anger, she also tells him off for “ruining” the women around him, specifically naming Lucy and Tiffany. Forgetting that George also had an relationship with him too and George takes offense at the idea that she is somehow ruined. Nancy tries to apologize when Ryan leaves, but George brushes her off not wanting to discuss her feelings now. Nick also tries to comfort her, but like before she pushes him away.

Act 3: The group sits in a circle to begin the ritual. Right away, a wind whips through the house, destroying a table in the living room. They don’t reach Owen, but they do reach the Aglaeca, a terrifying Gollum-like creature who screeches at them and disappears. It seems she doesn’t want them talking to Owen. After their unsuccessful seance, Bess, Nick, and George head to the Marvin mansion to see if there are any clues to dig up there while Nancy stays with Ace. They go to learn more about the Aglaeca. On their arrival to the mansion, it becomes clear that Bess’ family is eccentric. One asks George and Nick if either of them are artists because Owen will need “a portrait for the Hall of Tragedies” now that he’s been murdered. George and Nick talk to the group, who all have a motive for killing Owen but also seem too self-absorbed to pull it off. Meanwhile Bess talks to Aunt Diana, who again asks Bess to use her relationship with Lisbeth to benefit the family by finding out what the police know about Owen’s killer. It's clear that Bess is conflicted about her relationships between her newfound family and girlfriend.

Act 4: Nancy and Ace are at the historical society talking to Hannah, who is incredulous that the Aglaeca could be responsible. She says the spirit is unusually rare, hardly ever appearing in front of people. When Nancy admits they successfully contacted her, Hannah is shocked, saying “she’s not your common street ghost, she’s like a white whale.” Ace unhelpfully responds with “well, she did have a tail.” The trio realizes that whatever killed Owen was human.

Nancy and Ace call the rest of the crew, who tell them they don’t think the Marvins are responsible with Bess backing up George and Nick's claim. Lisbeth arrives at the mansion to obtain DNA samples from the Marvins, and Bess has to step in and smooth things over between Lisbeth, Aunt Diana, and the more vocal of the Marvin cousins. She volunteers to go first to show the rest of Marvins they have nothing to fear. Nick again tries to talk to George about the tension between them, but she isn’t ready.

Act 5: Nancy and Ace go to Owen’s apartment to look for clues. Nancy notices he has a ghost catcher, and this makes her even sadder. Ace is gently supportive throughout this scene, telling Nancy that he knows she doesn’t like to share her feelings with everyone but that he’s there if she needs him. Nancy appreciates Ace not being pushy. As Ace tries to unlock a trunk in Owen’s room, Nancy notices a hand-print on the window pane: someone was here.

Lisbeth and the rest of the police arrive. Nancy corners her to ask about the DNA testing at the Marvin mansion. She asks if they have a suspect, and Lisbeth tries to keep her out of the investigation. But Nancy says this investigation is what’s holding her together right now, asking Lisbeth to let her help. Lisbeth seems on the fence, but then looks to Ace, realizing they actually could use his tech skills.

Act 6: Outside the Marvin’s home, Ryan arrives to find George standing outside. She texted him, and he’s confused as to why. George gains confidence in herself. as she tells him that because of him, she can’t have a normal relationship. She tells him how being “the other woman” at seventeen has completely warped her idea of what love is, saying that she may have been young but he should have known better. She calls him out for his behavior, saying “you made me feel okay with being a dirty little secret, because I was seventeen years old.”

Ryan tries to halfheartedly defend himself, but George shuts it down immediately.

Nancy, Ace, and Lisbeth, are reviewing Owen’s calls from the day of the murder. They come to the realization that the killer may have been targeting Nancy, not Owen. Lisbeth is called away, and she instructs Ace and Nancy to stay put. Nancy being Nancy, she immediately gets up. She has a hunch that Josh is back, and she and Ace head to the nursing home to see Patrice. When they arrive, Nancy goes in to talk to Patrice alone and has Ace stand guard outside. Patrice thinks Nancy is Lucy, and her interactions with her “daughter” are poignant and sad. Nancy decides to tell her grandmother who she really is: Lucy’s daughter therefore her granddaughter. Patrice, even in her dementia, is happy about this revelation. She touches Nancy’s face as she laments that she’s missed Nancy’s whole life. Nancy smiles and just says that she’s only missed part of it. She asks where Josh went, and Patrice returns as she smiles and says “he never left” while glancing at the ceiling alerting Nancy that he's on the roof. Outside, Ace sees the lights flickering in Morse code at the other end of the hall. He whispers “SOS” as he walks towards the source, but when he reaches the room, the door slams shut behind him. Nancy rushes to the roof to find Josh standing there waiting for her. He tells her that he didn’t want to kill Owen, but that he refused to lure Nancy to Josh and so he had to kill him. Nancy tells Josh that she is his niece and that Lucy killed herself, which Josh doesn’t want to believe. Just then, Ace arrives on the roof. He tells them the police are on their way as they hear the sirens, and Josh breaks down. He tries to jump off the roof, but Nancy and Ace manage to catch him.

Back at The Claw, the group discusses what happened, with Nancy feeling conflicted about saving Josh’s life. But the group praises her for doing the right thing. The conversation turns to the Aglaeca, who is still out there and ready to collect her toll. Lisbeth lets Bess know she knows that Aunt Diana has been pressuring her as Bess hasn't been subtle and warns her girlfriend that she shouldn't be 100% trusting towards her newfound family.

George and Nick are outside, and George asks to talk. She says that she knows she’s been distant and wants to apologize for making him feel badly. He starts to tell her no apology is necessary, but she tell him she doesn’t want to make him feel like a secret. She says she isn’t good at relationships, but is working on it and wants to be with him, for real this time. Nick says that in that case he’ll make a restaurant reservation, and George smiles as they kiss. Bess is back at the mansion with Aunt Diana, who praises Bess for her handling of the Owen situation and dangles the possibility of being a full-fledged member of the family. Bess sees the portraits in the hall and asks her aunt who is in them. Diana says there are so many stories to tell that she’ll save them for later, and as she walks away Bess looks closer at one of the paintings. She’s shocked to see that the artist has painted a being that looks an awful lot like the Aglaeca into one of them.

Act 7: In the final moments of the episode, each member of the Drew Crew receives a vision of their own death: Nick and George drown in Nick’s car, Ace is hung from a chain in the restaurant, Bess burns alive in the mansion, and Nancy falls off the bluffs, echoing Lucy’s death. All are scared and the message is clear: the Aglaeca is coming and she means business.

Ace: "I know lately you've been pummeled by life. Everything you've learned about your parents, and now...if you ever want to talk about anything, I'm here."
Nancy: "I really appreciate that. If I find the words, I will share them with you."

George: "Now I know I deserve whatever the hell I want."
Nick: "And, what's that?"
George: "You. Us. And not just some on the side version of us. You holding my hand in the center of town. So much PDA that the world is gonna barf. I guess I just got so used to being the girl you keep a secret. Not the girl you take to dinner."
Nick: "Well, then I'll make reservations."

Nancy: "You killed Owen."
Josh: "Well, if your boyfriend had just sent you the text like I asked him to, I would've let him go."
Nancy: "You used him to lure me to you."
Josh: "I tried. But, he wouldn't do it. He fought me, but I had to keep him quiet. It wasn't easy. He seemed to care more about you than his own life." 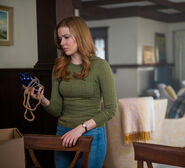 Retrieved from "https://nancydrew.fandom.com/wiki/The_Clue_in_the_Captain%27s_Painting?oldid=23865"
Community content is available under CC-BY-SA unless otherwise noted.