The Girl In The Locket

The Girl In The Locket

THE CLOCK IS TICKING

With only hours left, the Drew Crew must race against the clock to find a way to vanquish the Agleaca before she takes what is owed to her.

Act 1: A shocked Nancy confronts Carson about her newfound parentage. She wants to know why he kept this a secret and lied to her for all these years. Carson tells her both he and Kate feared for her safety, but Nancy doesn’t want to hear it. She storms off to her room as Carson follows, desperate to make things right. Nancy calls her mother “Kate” instead of “mom,” breaking Carson’s heart. It’s clear this revelation is having an emotional impact on Nancy, and her reaction is to run away. She sneaks out of her open window as Carson opens the door to discover her empty room. Nancy ends up spending the night at Owen’s, waking up next to him. He offers to take her to New York with him, and she accepts, thinking this will allow her to escape her problems. As he gets up, he notices fish hooks digging into his arm. It’s a sign from the Aglaeca: she’s not done with him yet.

Act 2: Meanwhile, Nick wakes up on George’s couch as her two little sisters stand over him, talking about their relationship. George enters and kicks the two out of the room, with George’s mom making several quips about how Nick should start paying rent if he’s going to keep crashing on their couch. Chastened, Nick goes to leave to find a new place to stay. As he and George look for his missing boot, Nick discovers that his boot is filled with saltwater that turns to a pile of salt when he touches it. It seems the Aglaeca is getting ready to collect on that debt the Drew Crew failed to pay. It's revealed that the others are experiencing supernatural disturbances as well.

Victoria explains that these portents indicate the sea spirit wants to collect on her debt. She’s going after everyone who participated in the ritual. The only way to stop it and save Owen is to conduct a ritual with the person who summoned the spirit (Nancy) and a blood relative of that person. However Ace knows that the ritual won't work with Carson being that he's the only one who knows about Nancy’s true parentage since he was there when she received the results.

Act 3: Nancy goes to find Ryan, still not knowing how she is going to convince him to participate in this ritual without telling him the truth. Ryan is in his living room, with the floor covered in pages from Lucy’s diary. Before Nancy can tell him why she’s there, he excitedly informs her that after reading through Lucy’s diary, it seems that Lucy was pregnant with his baby. Desperate to find answers he's going to an clinic located in an nearby town to search for his long lost offspring. Nancy acts as though this is news to her. She says she’ll help him with the clinic if he agrees to do her a favor, and he agrees.

Act 4: Bess is stressed. She’s planning her Aunt Diana’s birthday party, which is a huge deal and her big introduction to the Marvins. She invites Lisbeth to go as her plus-one, but Owen points out that Diana hates her. If Lisbeth attends, it could ruin the party and Bess’ standing in the family. Bess eventually finds Lisbeth to retract the invitation, and Lisbeth is surprisingly understanding. She says if Bess changes her mind, she’ll be ready.

Act 5: At the clinic, Ryan quickly loses his cool with the doctor who refuses to tell him anything about Lucy because of an HIPAA Privacy policy that protects an patient's health information for 50 years following their death. Ryan threats the doctor about how he's going to buy the clinic so he can find out what to his kid. Nancy tells him to wait outside so that she and the doctor can talk. Once he's outside Nancy tells the doctor to collect herself and walk outside looking she's upset as if she gave her Lucy's private information. Nancy leaves the room after the Doctor does as she's instructed and Ryan excitedly asks what she found out.

Nancy doesn't tell him that she's the long lost offspring he has been looking for opting to him an lie. She tells him that indeed Lucy was pregnant, but with her death day (August 31) and due date (September 30) being an month apart. That the baby died with Lucy and Ryan breaks at this revelation that he lost both of them that night.

As they leave, Nancy directs Ryan to drive to the Marvin’s party, where the Drew Crew earlier decided to have the ritual. She asks him if he would have been ready to have a child at eighteen. He says no, but also says that he would have figured it out and stepped up. Ryan asks what favor this is since Nancy still hasn’t told him. Just then, Nancy gets a disturbing new omen as she sees all her hair fall out. She panics, and Ryan pulls over. He demands to know what’s going on, and she tells him the half-truth that she needs help with a ritual to save Owen’s life since they angered a sea witch.

Ryan upsets Nancy when he insensitive wonders if it would simply be better to let Owen die since he hates the Marvins. Nancy snaps at him letting out her bottled-up emotions. Ryan also angry and unable to deal with his emotions leaves her stranded on the side of the road.

Act 6: Nick and George go to get Carson to help with the ritual, still not knowing that Carson and Nancy have had a falling out nor that he's not her biological father. Carson agrees to help, mostly to find Nancy since she’s not answering his calls.

At the party, Bess arrives in a stunning purple dress accompanied by Ace, who gives her a pep talk before she goes to meet the family. Lisbeth isn’t there, and it seems Bess has decided to deal with that issue later. She goes to see Aunt Diana, who is actually disappointed that Lisbeth isn’t there as she'd hoped to use her for information.

As Ryan is driving, he returns to the spot where he left Nancy, but she’s gone. He’s upset and cries, the day’s revelations catching up with him. He notices Nancy left her locket in the car. He opens the it and is shocked at the baby picture of Nancy. He pulls out Lucy’s yearbook, which features baby photos of Lucy’s class. He compares the photo in the locket with the baby photo of Lucy, and the resemblance is uncanny

At the party, the crew starts to assemble for the ritual, but Nancy is stopped when Ryan sees her. He confronts Nancy with the pictures and his theory that Nancy is his daughter with Lucy, still not realizing that Nancy already knows. She finally confirms this is true, but before either of them can fully process this, they have to complete the ritual. Carson unsuccessfully tries to talk with Nancy, but she sends him away. Nancy's friends excluding Ace are bewildered by Ryan's present at the ritual Ace starts the ritual partially so Nancy doesn't have to answer Bess's question. . Ryan and Nancy grip hands over the fire as the ritual begins. She cries out in pain and answers Bess's question about why Ryan is there. The group is shocked to learn the truth.

The ritual ends, and it appears to have worked. As they walk away, Ryan tentatively asks Nancy if they can get coffee, but she's not ready. Ryan is disappointed but understands however he's mad at Carson who tells him that Lucy's last wish was for Nancy to be protected against his family which unfortunately included him.

Carson and Nancy talk, with her making it clear she needs space. She tells him she’s going to New York with Owen to get some time alone, and he is saddened by her drive to escape him however he accepts it.

Back inside, Bess notes that George slept with Nancy's biological father. George is not thrilled at this news and she storms off. However there's an bigger issue as the gang still are getting potents. From Victoria's information they realize that the being they’ve been trying to contact is actually a ghost who was once alive, not the demon they thought. As a result, the ritual they just did didn't work. The group desperately tries to call Owen, but he’s not picking up. They then find him dead in a bathtub.

Nancy: I know what it feels like now. To have a secret that you don't want anybody to know, because if they find out it'll change anything.

Carson: I was afraid I was going to lose you.

Nancy: Keeping the secret changes everything, too.

Ryan: This is a picture of Lucy as a baby from our yearbook. Compare and contrast. You look like you could be twins, Nancy. Why is that?

Nancy: Yeah, Lucy was pregnant. You guys were together on New Years Eve of 1999. Her due date was late September 2000. She died August 31st.

Ryan: Maybe she had the baby early, you know? She put it up for adoption?

Nancy revealing the truth to her friends: Lucy was pregnant with Ryan's baby and right before she died she gave birth... to me. 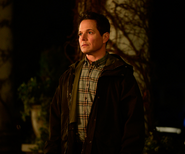 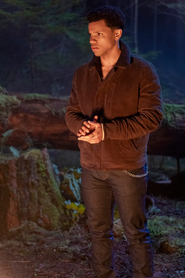 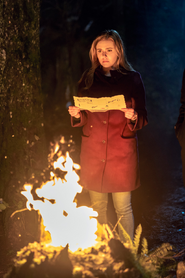 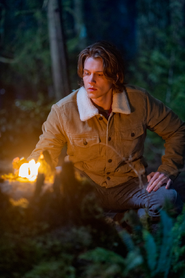