The Phantom of Bonny Scot

Ramsey Nickell
The Phantom of Bonny Scot is the eleventh episode of Season 1 of CW's television series Nancy Drew. It aired on January 22, 2020.

When Nancy's quest to clear Carson's name clashes with Owen's pursuit of justice for the victims of the Bonny Scot, she'll have to decide just how far she's willing to go to get her dad out of jail

Nancy dreams of kissing Owen, who becomes Nick. She investigates a strange thudding under the stairs when Dead Lucy startles her awake. Nancy takes this as a message and looks under the stairs at her mother's old files, and she discovers that her mother was Lucy's high school guidance councilor, but Lucy's folder is empty.

Nancy visits her father in prison to ask him about the missing file; they suspect Everett Hudson may have stolen the file while visiting Carson's home office.

Nancy calls Owen and heads to The Claw where she runs into Bess who's anxious about meeting her aunt Diana Marvin that day. Nick has his final meeting with his court-appointed councilor Keenan. George meets with Dawn Ziegler, the landlord of The Claw who is considering selling the location.

Nancy visits Everett Hudson and asks for his help getting her father out of prison, and he asks her to find out what Owen has about the Bonnie Scot. On her way out, Nancy sees Lucy's ghost that leads her to a painting.

Bess shows Lisbeth the van she's been living out of, and she opens up about her past. Lisbeth encourages her to be herself, so Bess shifts to her natural British accent. George asks Ryan Hudson for a loan to help with The Claw, but he can't help her. Nancy asks Bess about Owen, and they go to talk to him because he's been avoiding Nancy's calls. When they catch up to him, he introduces them to Bashiir, the sole survivor of the Bonnie Scot.

Bashiir tells the three about the Bonnie Scot, which didn't have any cargo and which sank because a bomb exploded, but Bashiir is too afraid to come forward. Outside, Owen and Nancy have a moment in which he points out how cutthroat Nancy can be, while Bess takes a lift to get to lunch with her aunt Diana. At the Claw, George and Nick talk about the financial situation and they come up with a plan to throw a party to raise some money.

Bess meets with Diana, who welcomes her into the family to help with business situations provided she help the "Marvin way". She asks Bess to have lunch with Amaya Alston, with the implication that it might lead to a relationship, but Bess's relationship with Lisbeth can't be serious because "Marvins don't marry drivers."

George and Nick prepare The Claw for a party. Nancy comes in and tells Nick about her dilemma, and she suggests they go and visit Bashiir because she remembers the time on the broken clock and the seawater damage of his apartment. They run out and arrive to find Bashiir is being haunted by the crew of the Bonny Scot.

Bashiir has been haunted for the past three weeks, ever since the crew performed the seance. Nancy encourages him to come forward to make it right, and it could make the haunting stop. The next day, Nancy meets with Ryan Hudson for his advise on his father, with Lisbeth there as Ryan's driver.

Nick returns to The Claw, but George is cold because he ran out on her, and she suggests he stop making other people his projects and work on himself.

Meanwhile, the Marvins and the Hudsons have dinner and they trade barbs. Nancy arrives to speak with Everett and apparently betrays Owen by revealing the fact that Owen has found a survivor of the Bonny Scot.

The Marvins and Hudsons confront each other. Celia Hudson says the insurance payout was pennies compared to what they lost from Sebastian's death, but Diana Marvin suggests that Everett acted in revenge because Celia and Sebastian were having an affair.

Nancy tells Everett about the evidence, and he offers a green card and a retirement package for Bashiir to "make this go away". He transfers the money to Bashiir's account, but Lisbeth and the police arrive to arrest him because it was a setup. Nancy remembers the dripping blood from the Hudson's painting and discovers a secret compartment with an envelop containing Lucy's missing guidance councilor file.

Outside, Owen congratulates Nancy and it's revealed that he was in on the plan. They kiss and Owen asks if he can finally take her out, but she declines.

Celia tells Ryan that Everett will be out of prison soon, but Ryan is upset that he murdered Sebastian for revenge and killed 11 other men in the process. Ryan reveals that he has a Grecian urn that was supposed to be on the Bonny Scott, and he wants to take charge of family operations now.

The party at The Claw is going really well, but Dawn tells George that she's selling the place anyway.

Lisbeth and Bess meet up at Bess's van where they confess that they're falling for each other. Bess gets a text from Owen about meeting Amaya Alston tomorrow, which she reads while Lisbeth is asleep.

After the party, George is upset about the sale, but Nick reveals that he's the one who made the offer. George is initially resistant because she doesn't want Nick to cash the bonds, but this is something Nick wants for himself.

Nancy has a call with her father, and she finally pushes him to take action to help her.

Nick waits with Bashiir to the usual time, and they confirm the haunting has stopped. Nick texts the news to Nancy.

Nancy reviews Lucy's guidance councilor file, and learns that Lucy's mother might be a suspect.

Carson: "Please, let this go."
Nancy: "You know me better than that."

“Maybe a good person does their best to help as many people as possible and I've seen your best, Nancy. There is nothing like it.”
— Nick----

Everett: "Find out what Owen thinks he has."
Nancy: "Don't you have people who usually do this kind of stuff for you?"
Everett: "Yes, I do. And he's in jail. You want my help getting him out, or not?" 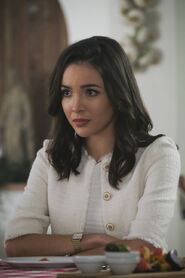 Retrieved from "https://nancydrew.fandom.com/wiki/The_Phantom_of_Bonny_Scot?oldid=21570"
Community content is available under CC-BY-SA unless otherwise noted.