The Riddle of the Broken Doll

The Riddle of the Broken Doll

Larry Teng
The Riddle of the Broken Doll is the sixth episode of season 2 of The CW television series Nancy Drew, and the twenty-fourth episode of the series overall. It aired on February 24, 2021.

Official synopsis of The Riddle of the Broken Doll from The CW:

HERE WE GO AGAIN - Nancy and the Drew Crew learn that they have a new battle on their hands. Meanwhile, George's strange behavior leaves Nick feeling unsettled. Lastly, Carson makes Nancy an offer she can't refuse.

COLD OPEN: It’s been two weeks since the defeat of the Aglaeca. Bess spends the time on a yacht cleansing her chakras, talking with Ace who is eating on the side of a cliff, George learns a new catfish recipe for Nick’s mom, though Nick helps George get ready for All Hallow Tide. The festival remembers the dead with kids making lanterns and releasing them at the shore to represent souls passing on. Nancy, however, is spending her days in the morgue she burglarized as she’s been arraigned for 500 hours of community service. The coroner’s son, Leo, wants to play with his father but Connor is too busy so he asks Nancy to do it. Leo introduces Nancy to his toys, including Charles, a figurine who talks for real and catches bad guys. He tells her that Charles says the spinning berries make the world go round. Detective Tamura brings in a new corpse that was found buried in a backyard. The corpse is haphazardly stitched together with Nancy noting how it looks as if he’s been sewn back together like a doll. She asks Tamura who the suspect is but he merely tells her she missed a spot mopping. Connor leaves for a moment and Nancy hears clamoring from inside the drawers, so she covers the camera with boxes to investigate. Carson calls her to break their lunch date as he has a new case, which she understands, but pieces together that he got the case that just came into the morgue. She unzips the body bag when she notices a strand of insects lodged in his mouth. She returns home to call Ace as she was supposed to cook for their game night but can’t. She hears banging in the kitchen and hangs up to investigate. She opens a cupboard and the corpse from the morgue falls out.

ACT ONE: George prepares food for her sisters and goes to get corn oil when she becomes dizzy and uneasy. When she comes to the kitchen is full of smoke and the fish is burning, with Ted and Charlie panicking. Charlie tells George that she got olive oil instead of corn oil, but George is adamant she got corn. Ace enters with a game for game night. The Drew Crew assemble at Nancy’s around the corpse, with Nick wanting to call the police but Ace and Nancy protest. Nancy thinks the body wants her to solve the murder and shows them the strand of insects. Ace doesn’t think a normal coroner can handle this with Bess agreeing, and even George. Nancy tells her friends to keep an eye on the corpse and examine it for a cause of death, which Ace and Bess are on-board with despite Nick’s protests. Nancy leaves to talk with the homeowner. The homeowner, Darlene, is a professional seamstress with her family being superstitious about the tree the body was found under. Nancy doesn’t think Darlene did it, with Carson pulling his daughter aside when she sees past due bills. He doesn’t want her to worry so she leaves. The Drew Crew prepares for the autopsy, with Nick wanting everyone to be sure they are ready to invite the supernatural back into their lives. Ace claims it gave him a sense of purpose while George sends a photo of the bugs to Jesse. Jesse IDs the beatles as creatures that have been extinct for a hundred years. George hums and sings in French which Nick finds strange but she doesn’t remember singing. Ace and Bess open the corpse to find that his body is filled with flowers and animal bones.

ACT TWO: Nancy goes to Hannah for help, though she is initially told to leave as Hannah is angry that Nancy compromised two centuries’ worth of haunted objects and exposed the town to great danger. By opening the boxes Nancy could have freed all the spirits and even her security system isn’t working. Nancy volunteers Nick to help her with the system. She manages to convince Hannah to help her. The Drew Crew finds the flower which is nightshade and is highly dangerous to humans. Ace and Nick remove the animal bones as they quietly talk about George not opening up about her brief death. Ace offers to help as he understands after his near-death experience. The house begins to fill with beetles, bugs swarming the exterior, while George finds a colic root which went extinct in 1879. The corpse begins to bleed. Hannah offers to call a clergy from Greece for help, promising to call Nancy if she hears anything, but instructing her to watch the body. Ace sews the corpse back together as Connor and Leo arrive looking for Nancy. Connor is horrified to see the corpse, with Leo asking a recently arrived Nancy if a bad guy is in her kitchen. Connor wants to call the police but Nancy blackmails him into not calling them. He loads the corpse into the van but doesn’t notice when it blinks.

ACT THREE: Nancy realizes the corpse isn’t dead anymore as the blood is fresh. Connor drives Leo home in his coroner’s van but stresses over how his wife will respond to Leo being in the front street. Nancy calls but he ignores her call, though Leo’s toy Charles loses his arm which flies out the window. Connor searches for the arm while the corpse sits up in the back seat. Nancy arrives on the scene with Nick and arrives just in time to see Leo wave his toy at the corpse and scare it away. The rest of the Drew Crew arrive with Ace having the police scanner on. According to Hannah, the corpse isn’t human but an evil entity called a “therion” masquerading as one. Bess drives Leo and Connor to Nancy’s, but Leo wants to give Nancy Charles to keep her safe. Nancy and Nick go to Darlene’s house to investigate the burial site. They go inside the house which is full of antiques, including a key from the Historical Society. Hannah pulls the box which is from 1847. Edith Yates, maiden name Fowler, signed for Box 12, which contains the vapor of a lamia, its soul. A lamia is one of the therion that preys on human victims. Edith was one of the women in white, one of the first women to call to the Aglaeca. Hannah believes the women in white used a vanquishing ritual to separate the lamia’s from its body, but recreating the ritual is impossible. The vapor was sealed in box 12 and never to be opened again, with the vapor reuniting with the body when Nancy opened the lockboxes. On Midsummer’s Eve, 12 children were murdered on the same day at the hands of the lamia. Charles Fowler was a victim and Edith’s son, with Nick recalling an angel statue outside with the name “Charles Fowler” engraved on it. Charles watched over the grave, and Nancy recalls Leo’s words about spinning berries which relates to the pinwheel by the grave. She realizes that Leo has been talking with Charles Fowler the whole time.

ACT FOUR: In a car, Ace talks to George about her death experience, relating to her spacing out. She admits to not remembering much from her experience aside from the sky, sunlight, and water. She isn’t sure where she goes when she zones out. She worries about not feeling normal but he assures her that she’s still herself, she just has to remind herself of that. Nancy reaches the house where Connor is panicking overseeing the body be reanimated. Nancy tries to talk to Leo about Charles, but he won’t talk about the bad guy or how Charles protects him. She realizes the victims of lamia are its weakness. Bess helps Leo open up by playing with him, as Leo explains the ghost’s favorite things. Charles wants Nancy to remember all twelve victims. Ace calls to tell her that the scanner picked up a naked man headed to Bayside Drive, which is only being used by the Fan sisters. Ted and Charlie argue over what their fans look like but are scared by growling. Jesse emerges with more paper and panics when her sisters disappear.

ACT FIVE: Nancy and the Drew Crew arrive at The Claw parking lot where the lamia has Ted and Charlie under its spell. They place the victim’s objects in front of the children while Nancy reads the names of the victims. George tries to reach her sisters prematurely so Nick restrains her. When the ritual is complete, the lamia is dragged into the ground by its victims. The Fan sisters collapse to the ground in a deep sleep. Connor tells Tamura that the body was just a cadaver that med students stole as a prank, which Tamura isn’t amused by. Nancy and Tamura banter before he asks them to leave. She assures Connor the lamia is gone so he leaves the station. George and Nick clean up The Claw with her having promised to tell Jesse the truth later. She tells Nick she isn’t okay but has to figure it out alone. Nancy waits at Carson’s office where she learns that Tamura isn’t pressing charges against Darlene, but it also means that without a trial he has to give her a refund on her retainer. He is grateful she investigated to prove his client’s innocence, as she’s great at being a detective. He asks her to work as an investigator for his firm as his secret weapon. She agrees to work part-time with a paycheck for the cases they win, with him happily telling her lunches are included. George goes to the bathroom where she remembers singing in French and getting the wrong oil. She tries to remind herself that she’s still here, just as lights flicker and Odette emerges, telling George she’s here too.

Leo: "Charles wants to stay with you in case the bad guy comes back."
—
Nancy: "Oh, I know. But we're gonna send you somewhere super, super safe. Okay?"
—

Nancy: I'm not proposing anything formal. I just think that it's an opportunity for observation and conjecture. Ace:I concur. It's not every day that we get the opportunity to look at a haunted corpse. Nancy:Precisely. Take your opportunities when they come.}} 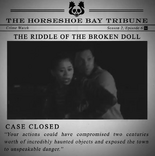 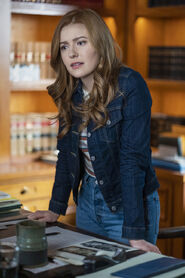 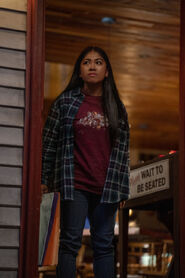 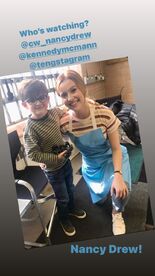 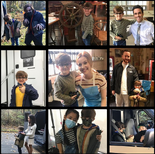 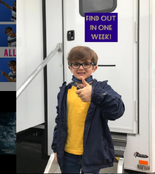 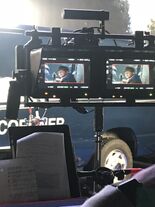 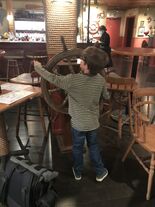