The Terror of Horseshoe Bay

Katie Eastridge
The Terror of Horseshoe Bay is the fifteenth episode of Season 1 of CW's television series Nancy Drew. It first aired on March 4, 2020.

Official synopsis from The CW:

With time running out before Carson's evidentiary hearing, Nancy turns to supernatural sources in a last-ditch effort to find clues to exonerate her father.

Act 1: In search of Josh Dodd, the team reviews security footage that shows him walking away alive. The next morning, Carson and Nancy plan for Carson's evidentiary hearing the next day, and Nancy goes out to find the evidence to exonerate him. At The Claw, the team discusses the town holiday Harbor Day, which celebrates the first ship reaching Horseshoe Bay; the ship was meant to arrive in Virginia but was allegedly pushed off course by a sea creature called the Aglaeca, and on Harbor Day citizens can ask the Aglaeca for something. They see a news broadcast about the search for Josh Dodd. Nancy, Ace, and Nick go to the police station. Nick and Ace ask Ace's father about Claire Barnett's file. Nancy shows Karen the emails about Ryan and Lucy meeting the night Lucy died, and Karen suggests checking his alibi with his roommates at the boarding school. Lucy shows Nancy a vision of coughing up teeth.

Act 2: Owen calls Bess and learns about what happened, and meets Nancy at the police station. He accompanies her to meet Chad Vogel, Ryan's former college roommate. Chad tells them that Lucy broke up with Ryan, and confirms that Ryan left for a night in August 2000 and was busted coming back to the dorm. Meanwhile, Ace and Nick are unable to find any connection between Claire Barnett and Josh Dodd, but realize that another way for Josh to have gotten the poison is from police evidence.

Act 3: As Nancy and Owen leave from questioning Chad, Nancy gets a vision from Lucy, who has bleeding eyes, of scattered bones. Back at The Claw, Nancy tells Bess and George that she thinks Lucy wants her to find her bones, and Bess suggests asking the Aglaeca. Bess, George, and Owen go to the Historical Society to find any documentation on how to make a request of the Aglaeca. After receiving texts from Nick, Nancy goes back to the police station where they tell her that the fridge holding the poison was repaired a week before Tiffany died, and that's likely when someone access the poison. Nancy, Nick, and Ace sneak into the evidence room and discover that the seal on the poison vial is new, not fifteen years old, and Nancy suspects the original vial was been swapped with a decoy. Detective Karen Hart finds them, and Nancy confronts her, saying she realized it was Karen who swapped out the poisons when she realized the refrigerator work order was signed by her. Before they can be stopped, Ace drinks the vial, proving that the real vial of poison was swapped out and this one just contains water.

Act 4: Nancy also shows Karen the cloud backed-up footage of Karen going to Josh's the month before, saying, "I gave you the poison for Ryan, not Tiffany." Karen finally admits that she wanted justice for Lucy, and Karen is arrested. Ace tells Nick that he heard a boat is missing from the marina, suggesting that Josh Dodd has gotten away. At the Historical Society, they find instructions on how to make a request of the Aglaeca. Nancy calls Carson and tells him about Karen's involvement in Tiffany's death, but Carson tells her it's not enough to prevent him from being convicted. Nancy realizes that she needs to get Lucy's bones, and she'll need to call to the Aglaeca to get them.

Act 5: The team meets up at The Claw and come up with a plan to call the Aglaeca. The six go out and perform the ritual, and the Aglaeca brings Lucy's bones as requested. But the cost is Owen's blood. As Owen's skin splits open, they destroy the wreath used in the ritual to save him, but that means that the Aglaeca hasn't been paid.

Act 6: Nancy bandages Owen, and she's already arranged for John Sander to examine the bones. Nancy takes Owen back to his place, and the two hook up. George offers to let Nick crash on her couch. The next morning, Nancy coughs up the seaweed reef, indicating that the Aglaeca still needs payment.

George: "Well, it's not as great as a booth at the claw, but I do have a couch with your name on it. If you're interested."
Nick: "Actually, that sounds great. Thank you."
—
Ace: "I know Nancy. I knew she was right."
—
Karen: "I wanted to get justice for Lucy. She was my best friend."
—
Owen: "I've been leaving messages. Is she okay? Who let her go confront a murderer by herself?"
Bess: "'Who let her'? Owen, have you met Nancy?"
— 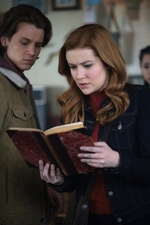 Retrieved from "https://nancydrew.fandom.com/wiki/The_Terror_of_Horseshoe_Bay?oldid=21247"
Community content is available under CC-BY-SA unless otherwise noted.