Thornton Hall is the mansion of the Thornton family on Blackrock Island off the coast of Georgia.

In addition to the mansion itself, there is small house to its left which would later become known as "the ruins". A family cemetery connected to the mansion and a factory for the family business are also near the mansion.

The island had been in the family's possession since the end of the Civil War - probably 1866, since that was when the cemetery was established.

In 1989, a fire occured at the small house and ended up killing Charlotte Thornton. The island was then abandoned and quickly fell into disrepair. In 2013, Jessalyn Thornton came to Thornton Hall for a sleepover and ended up disappearing, causing Nancy to come investigate. Harper Thornton's use of the furnace ended up causing a fire that burnt down the Hall.

In the event that Harper, Jessalyn and Clara are saved from the fire, Harper is asked to rejoin the family, and she decides to completely raze Thornton Hall and the ruins and build a public park on the island dedicated to all the lives lost there. 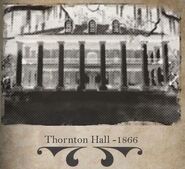 Add a photo to this gallery
Retrieved from "https://nancydrew.fandom.com/wiki/Thornton_Hall?oldid=15940"
Community content is available under CC-BY-SA unless otherwise noted.