Ned Nickerson
Tiffany Hudson (née Tandy) is a character in The CW 2019 television series Nancy Drew. She is mysteriously murdered outside The Claw restaurant, leading to Nancy and her associates being suspects. Tiffany Hudson is portrayed by Sinead Curry.

Tiffany is a debutante socialite married to Ryan Hudson. She was the single eyewitness that led to Ned Nickerson's manslaughter conviction. At some point, Tiffany visited the medium Harriet Grosset because she thought she was being haunted.[4]

Three days before her death, she visited Hannah Gruen and recorded a video. Tiffany was afraid that someone was after her because they didn't want her to solve Lucy Sable's murder.[5]

Tiffany is with her husband Ryan when they visit The Claw restaurant on Parade Night, but Tiffany stays out by the car instead of joining the diner. Nancy Drew serves her food and takes her wine order. Alone in the parking lot, Tiffany makes a 911 call. When Nancy goes back outside with Tiffany's drink, she finds Tiffany dead on the ground.[4]

Tiffany and Nancy Drew outside The Claw 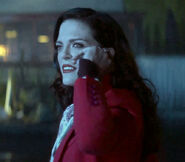